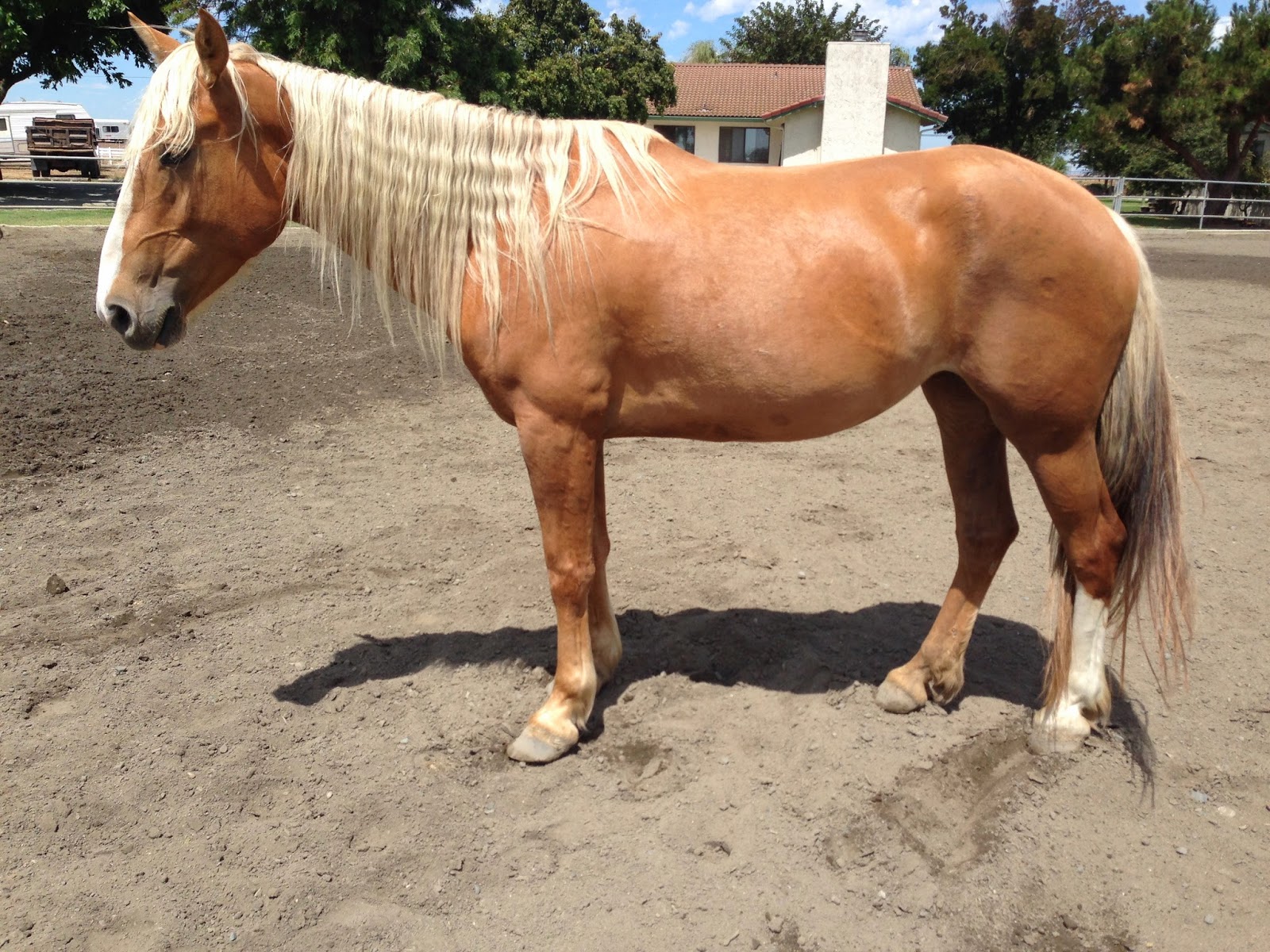 Opal soaking up the sun.

Time has really gotten away form me the last week and a half.  Between lessons and training, I was lending a hand as best I could helping prepare the Stables for several new horses moving in as well as helping cover stall cleaning while our wonderful hard working Jose took his family on a well deserved vacation.

While all this madness was going on the last several days, the girls crossed the line from needing to 'get fat' to conditioning.  We are now at the point where they can be ridden and start building up on their lounging time as well.  We increased Opal's dinner feeding a bit to help continue her gain, while Ehawee is near her goal weight (and has a little belly currently) and will continued to be monitored to find exactly the right feed amount combination to maintain her weight.  Both are gaining at a good, steady rate.

Savanna, one of the younger boarders at Cypress and a good rider, rode Ehawee one day while I rode Opal.  Both mares were happy to be back riding in the arena, Ehawee so much that she gave 3 jumps of joy when she first walked forward.  Opal was only interested in following her friend around, and wasn't too thrilled I wouldn't let her. 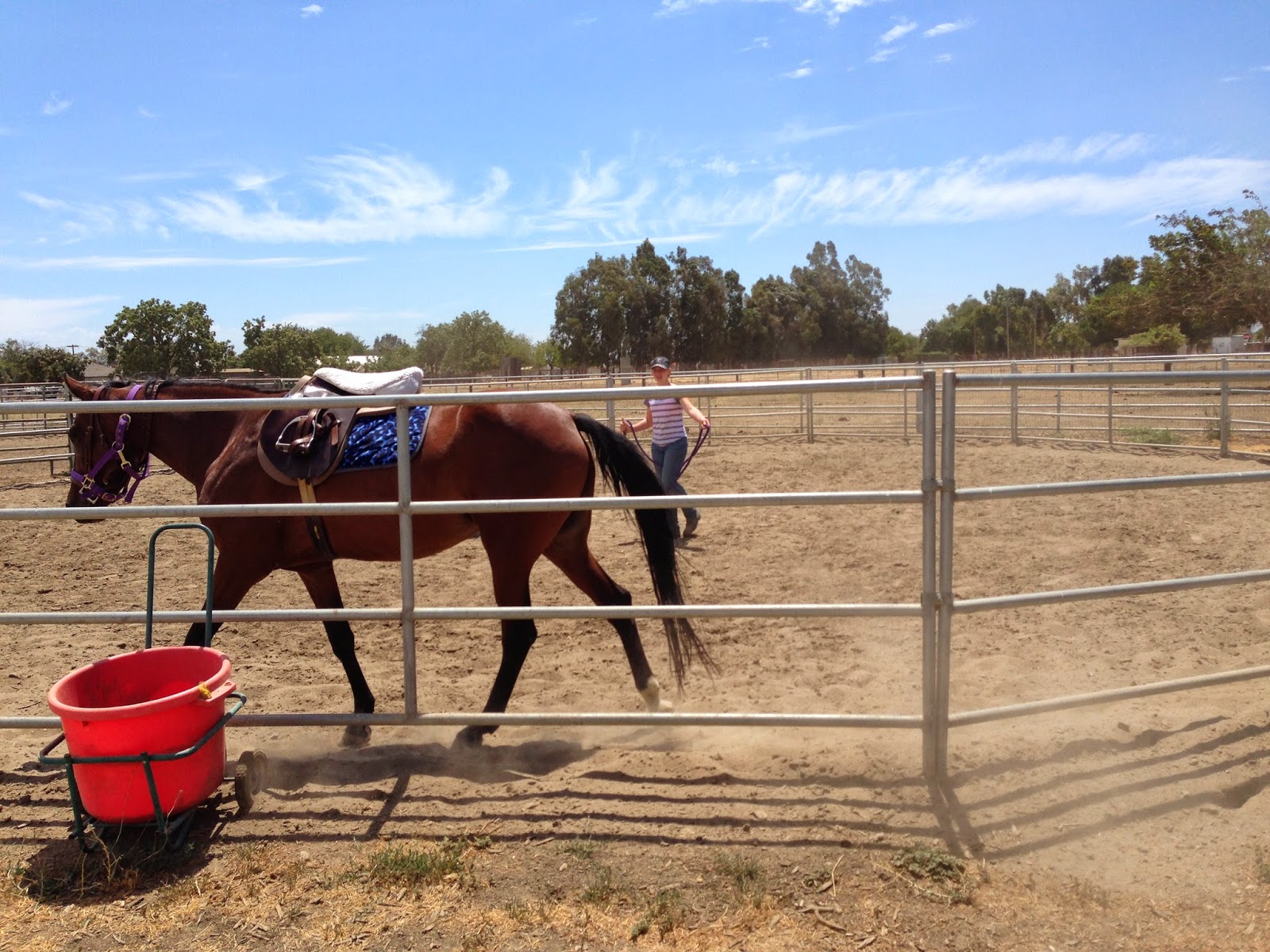 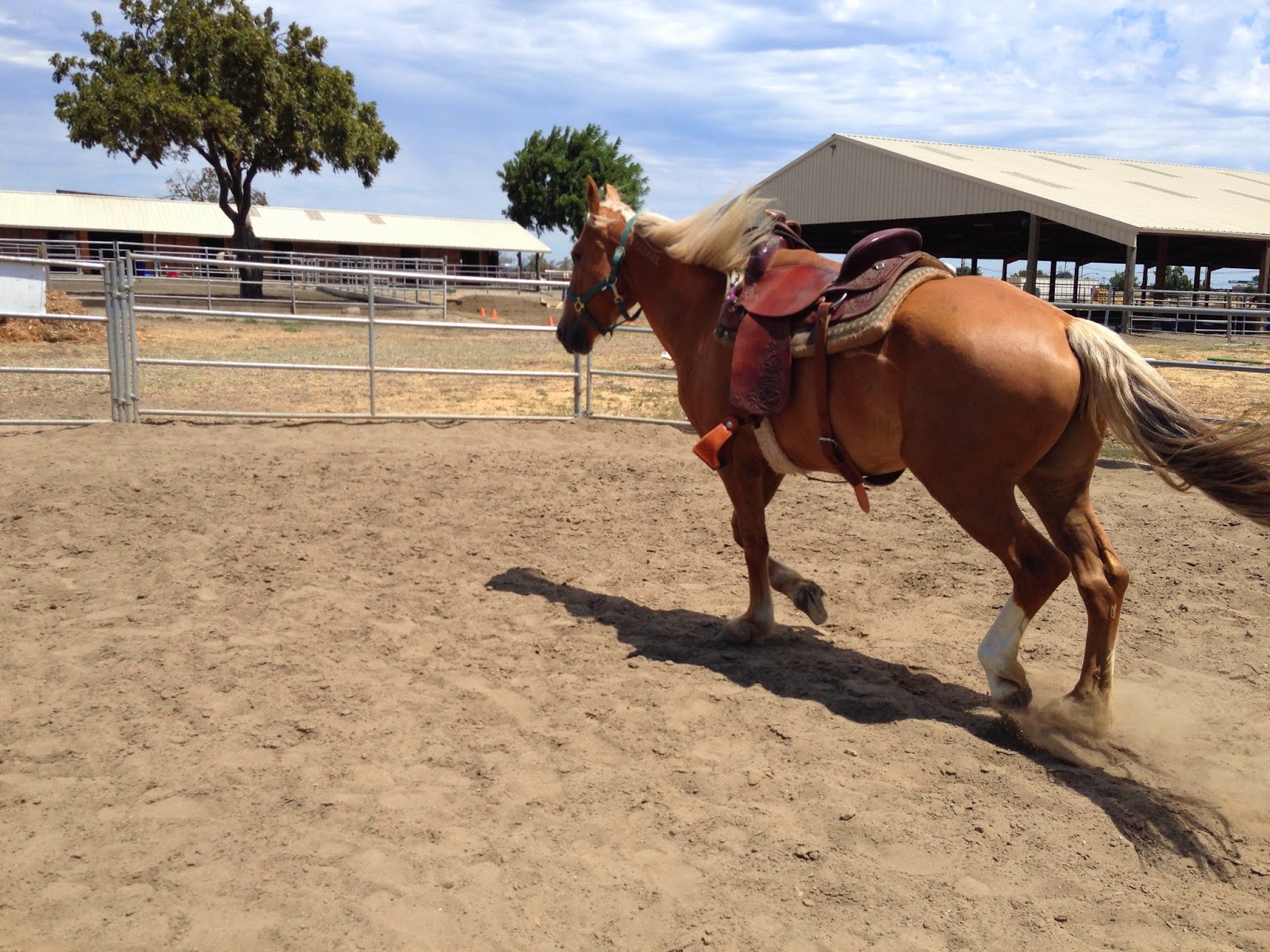 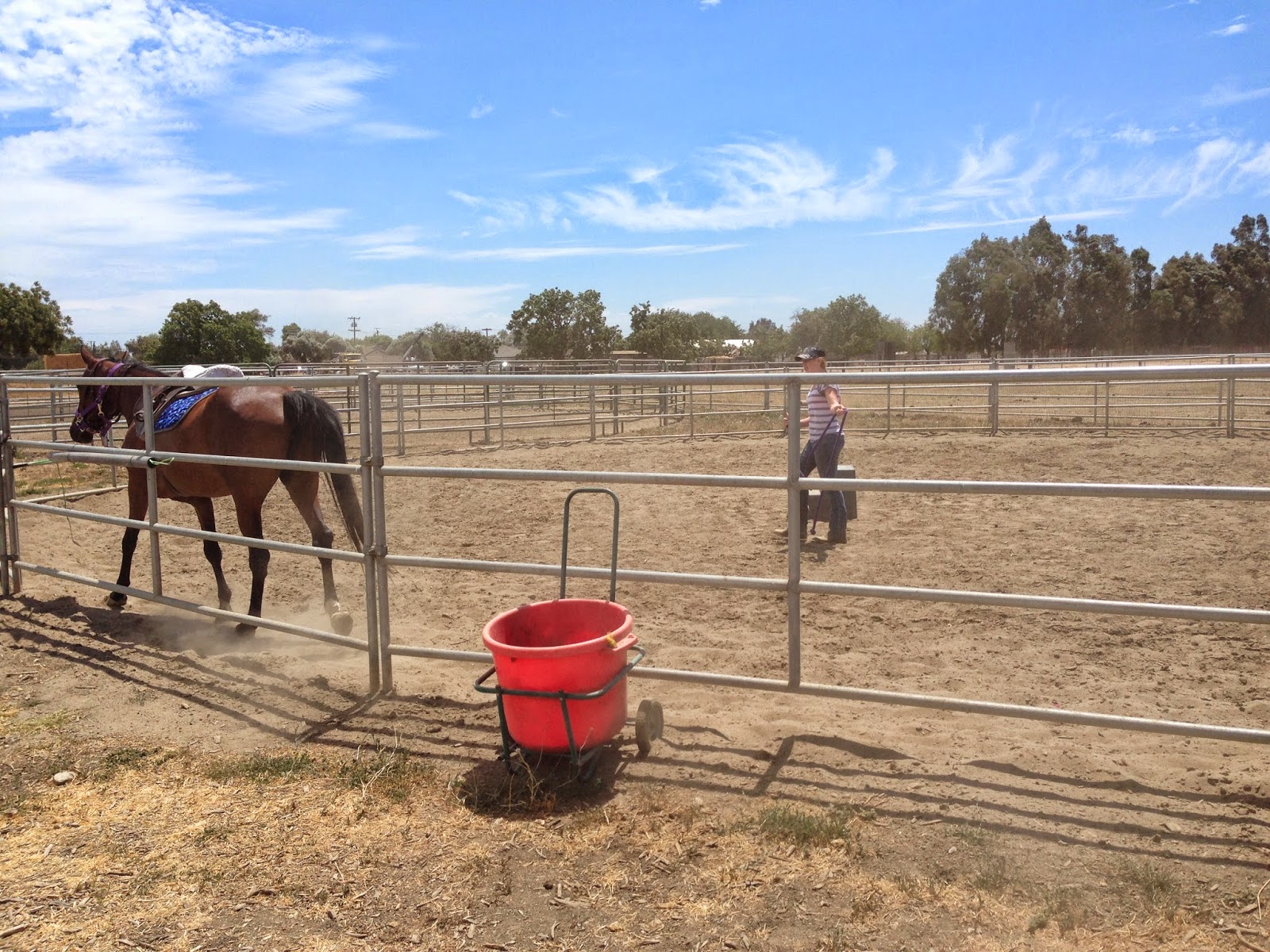 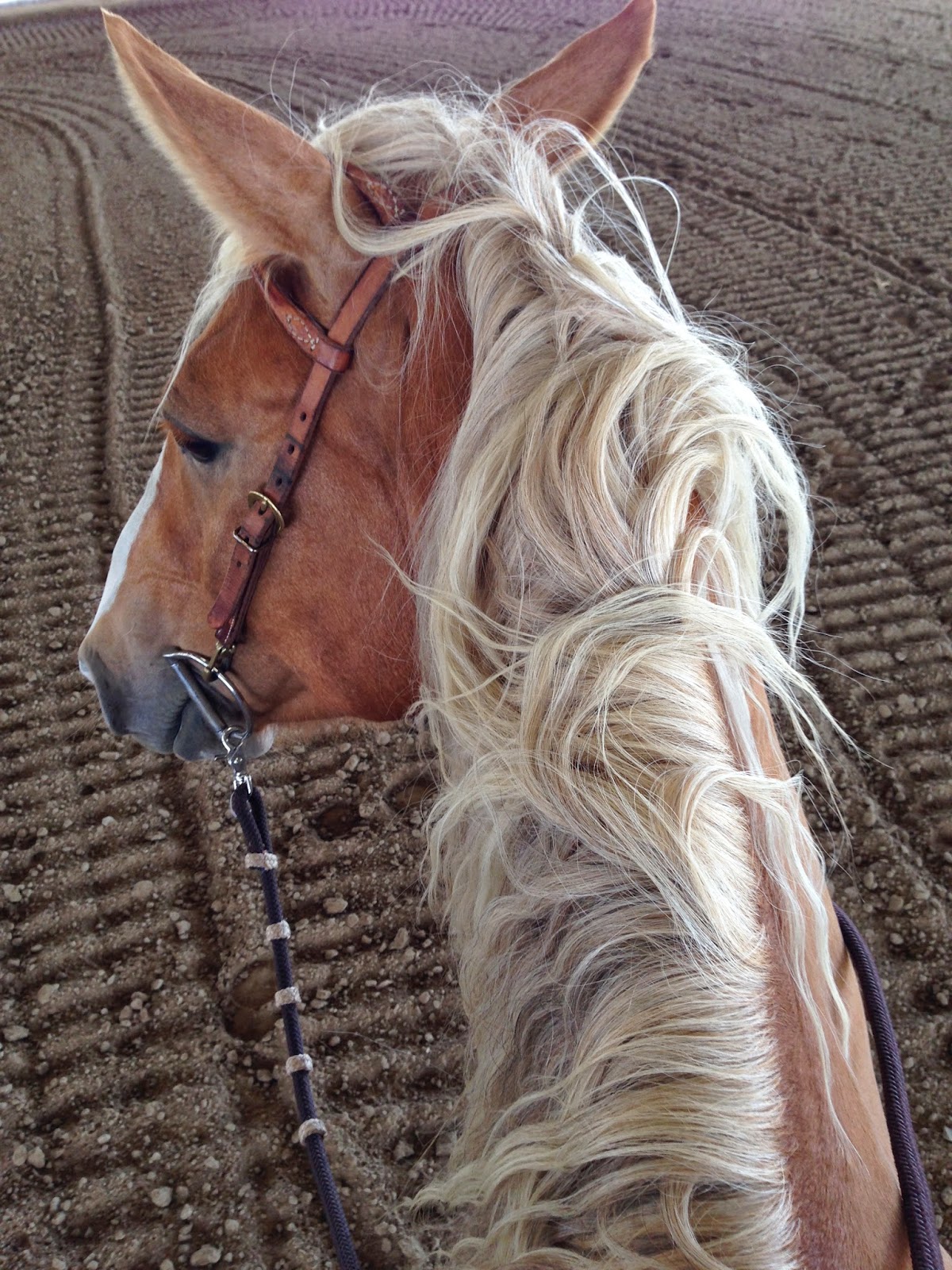 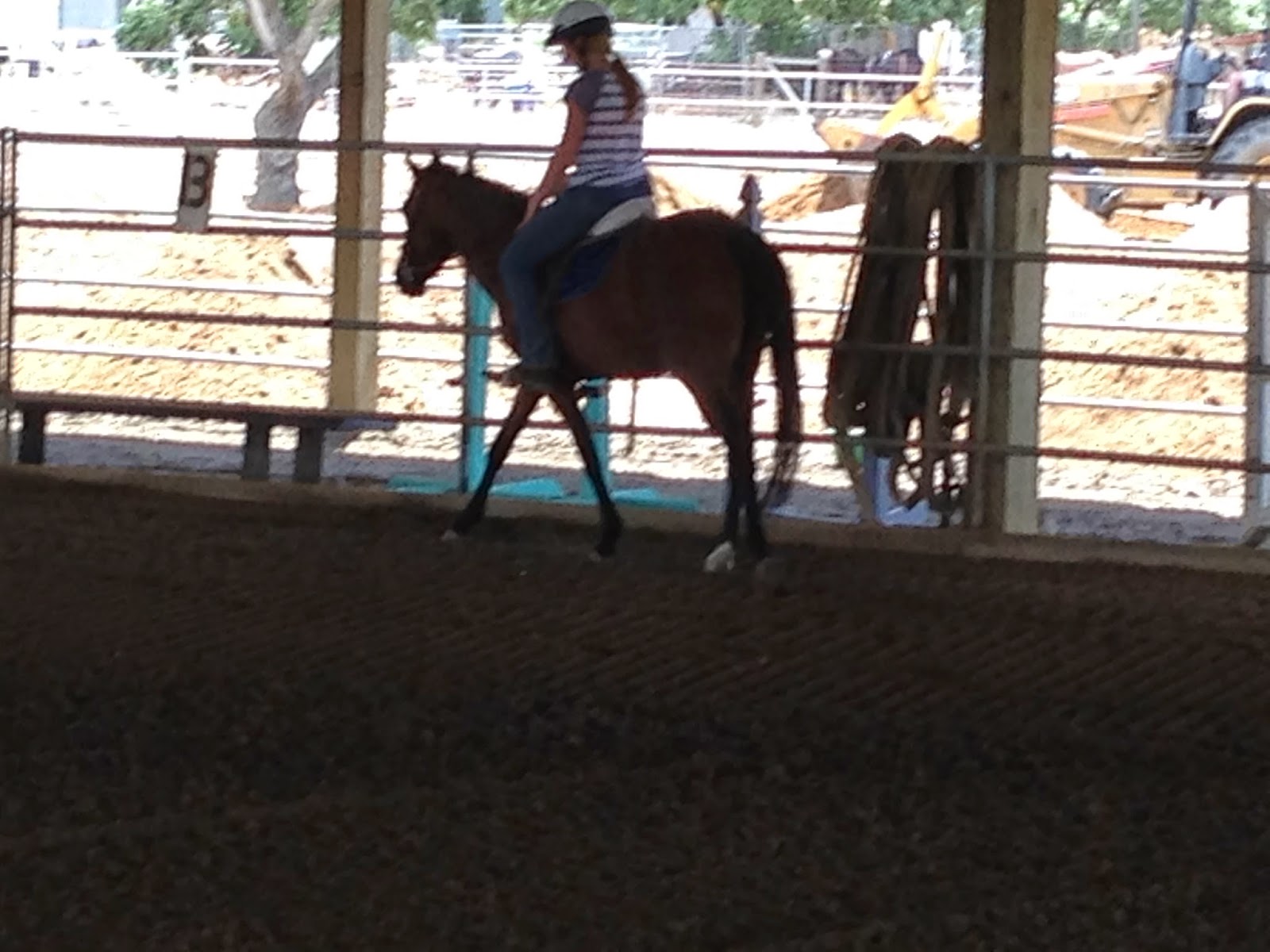 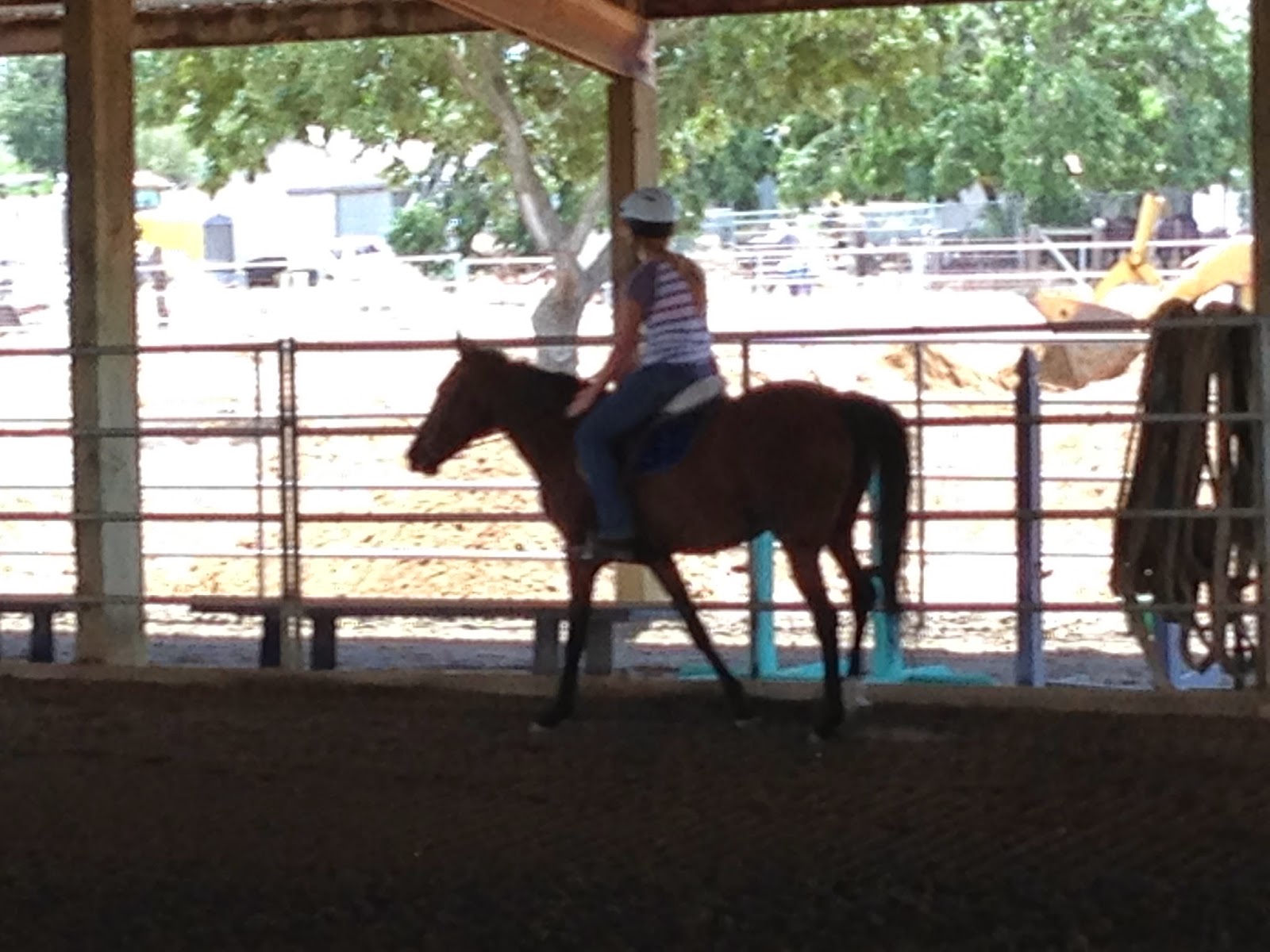 Opportunity presented itself for a trail ride with Amigo and his owner Greg, so we jumped at the opportunity.  We loaded up early and headed for Round Valley.   Opal didn't like going across the bridge first so Amigo lead the charge.  The trail started out level and slowly began to rise.  We hit some spots where there were big rocks in the trail you either had to go around or they were low to the ground and you had to walk over them.  We arrived at a set of 3 that almost made stairs, that's when Opal said "no Mom".  I asked again, same answer, so I dismounted and she followed me as I lead her along the trail a bit further.  It was hot out, so we stopped several time to water the horses and ourselves.  Opal worked up a good sweat and we decided to head back for the trailer on foot over the rocks since we were now going downhill.

Both horses moved along like champs.  Once we hit flat ground again we remounted and continued to the trailer.  I've never practiced with a real gate with Opal, but decided to give it a try with the cattle gate.  It took her a few minutes to understand where I wanted her to go and what we were doing, but we were able to hold the gate open for Amigo to walk through and get through ourselves. 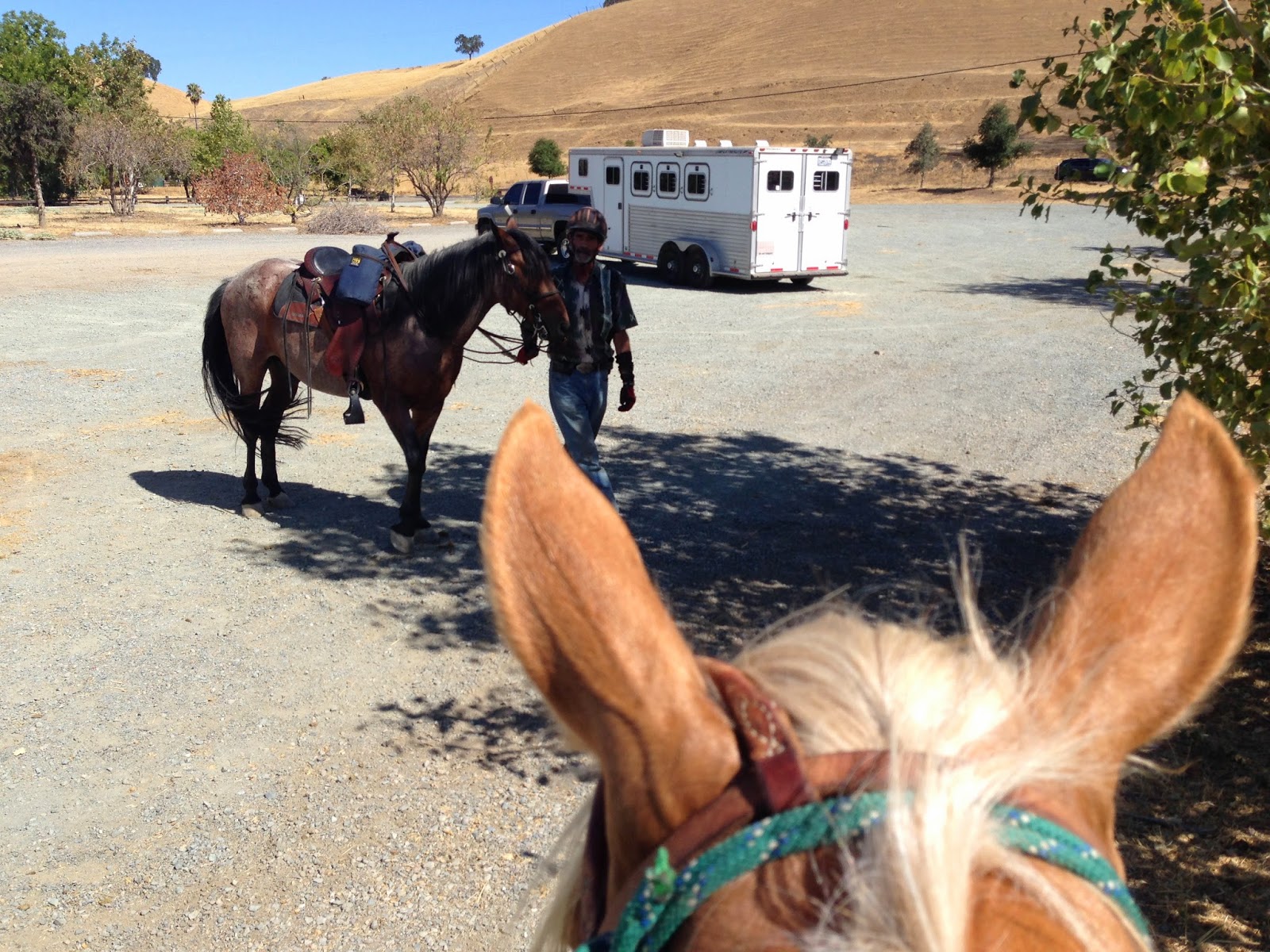 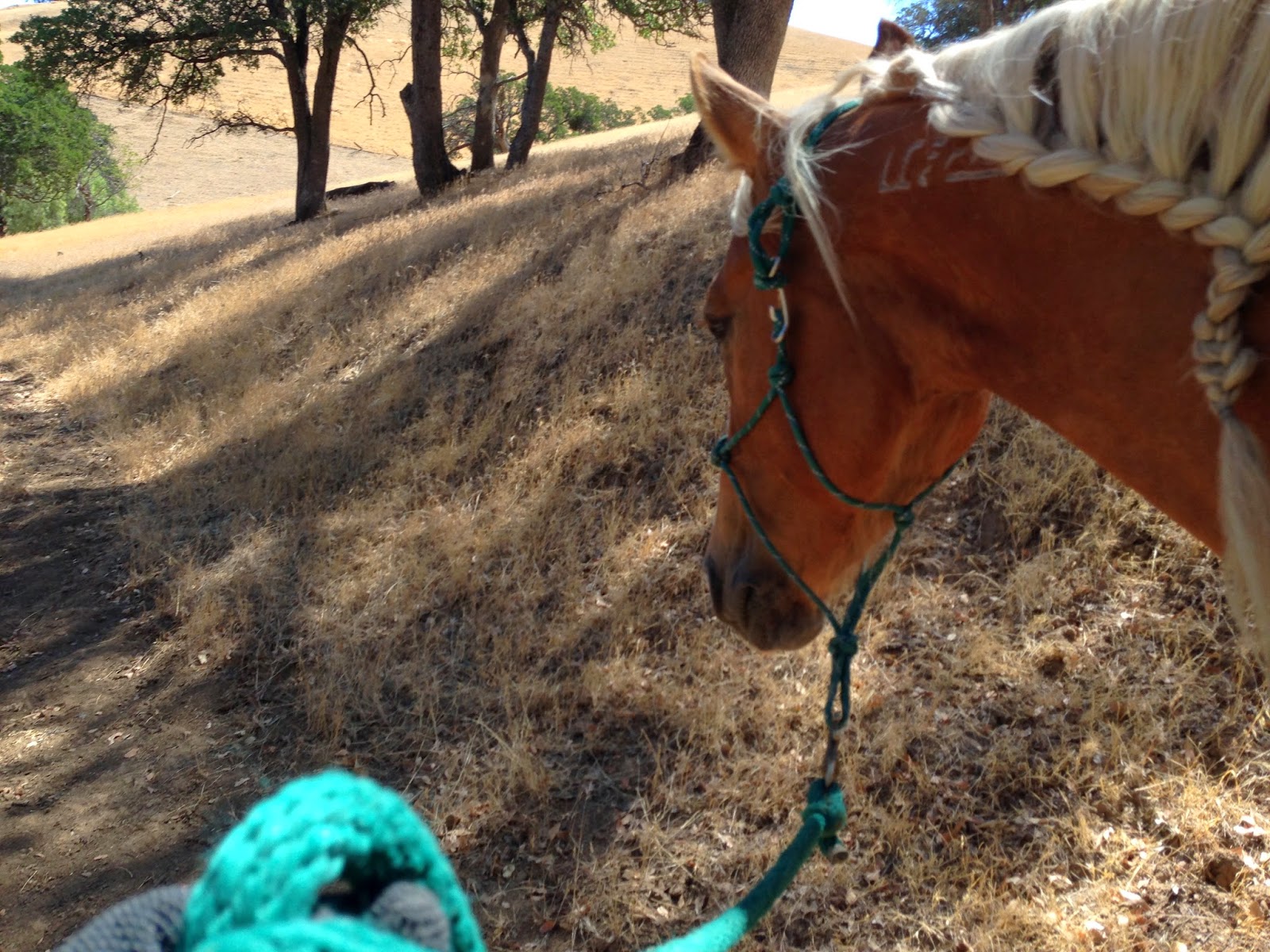 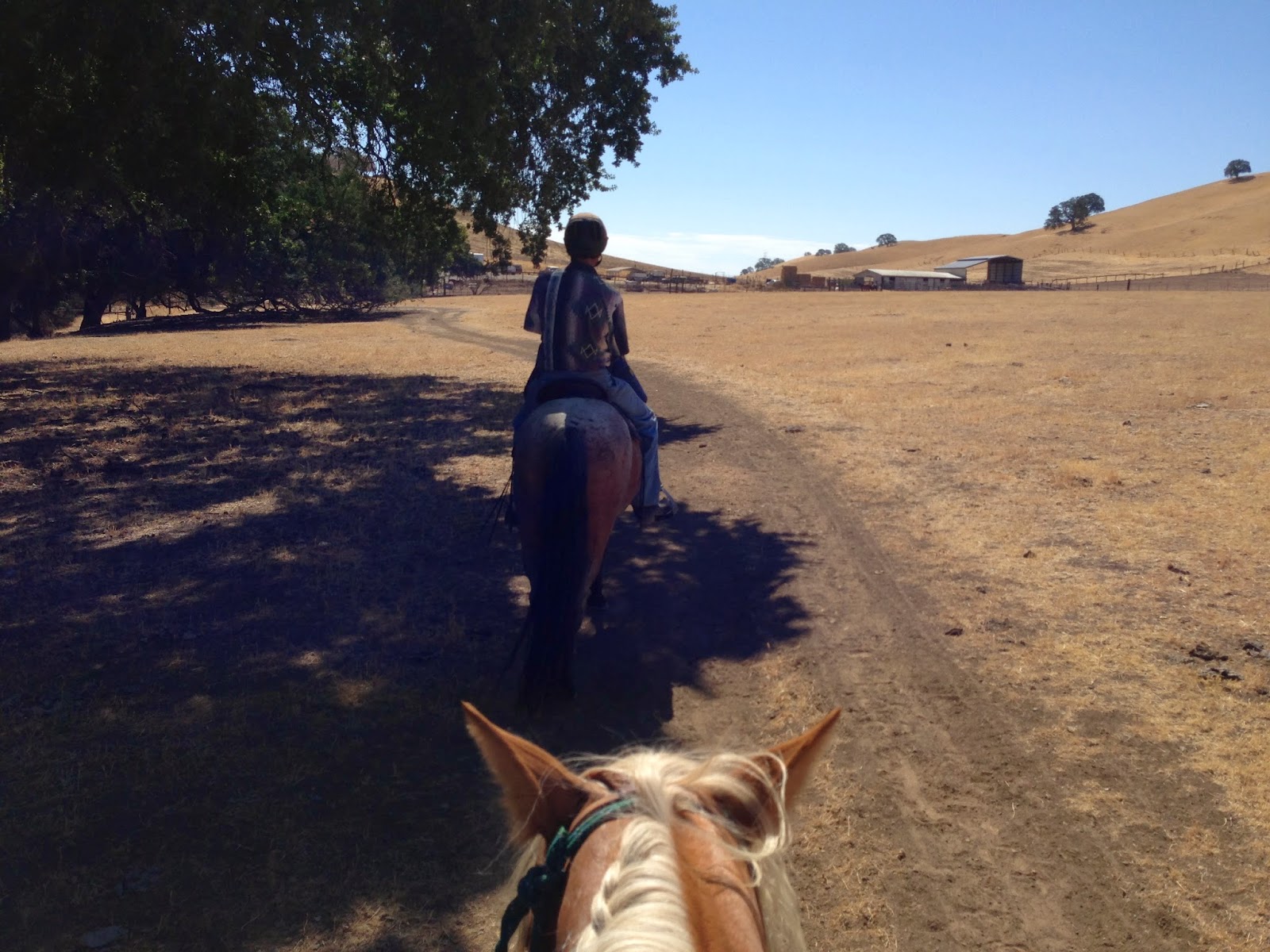 Out on the trail both riding and walking in hand.

Once home both horses got a nice cool bath and lots of goodies and loves. 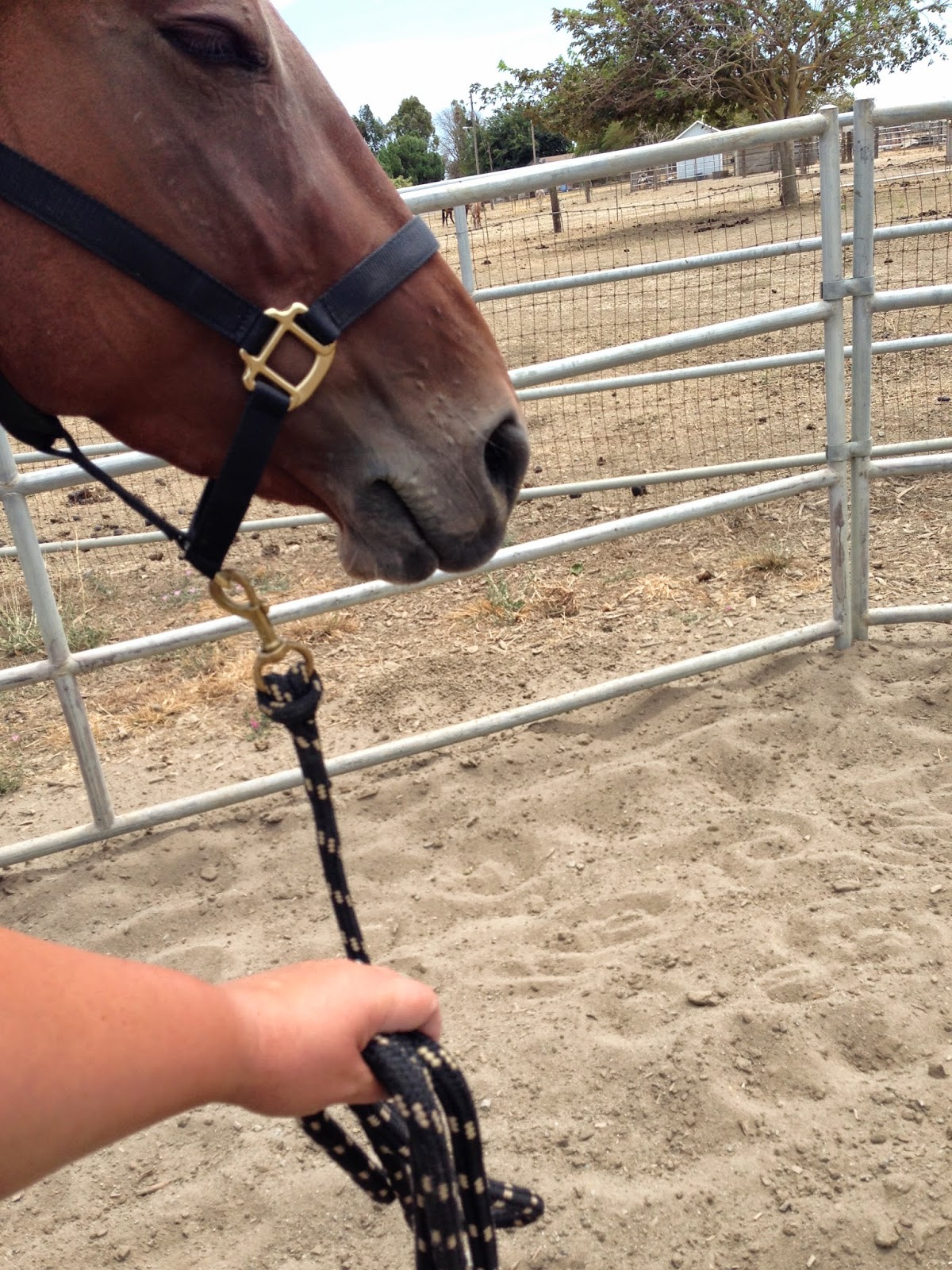 Emmy leading on the left.

Emmy finally got leading on the left earlier this week.  Previously she would trot/canter past me when she got to me.  Once she got this we worked on the squeeze game and passing between narrow places. (Like the trails Opal and I were on today)  I like to have the option to lead from both sides because you may find yourself on a narrow trail and not be able to lead from the correct side.  (Hey, that happened on the trail today to come to think of it...)

Since I had another trailer hooked up, Emmy also practiced loading in a different trailer, she wasn't on board at first but after a brief discussion she went in twice.  Emmy likes to exit the trailer a bit fast, so for now I will only be letting her back out slowly.

I continue to work with Emmy on ground work and desensitizing to everything.  Ropes being tossed around, tarps, noodles, you name it.  We take it one thing at a time.

Emmy LOVES water....as you can tell by the videos below.  She has a smaller rubber water tub because she cracked and broke her larger plastic one a few weeks ago.  I will fill it no more than twice for her since she just plays in it mostly and I don't want to waste water.  This is usually how I find her water tub everyday.  (Don't worry, she also has an automatic waterer that she uses all the time) 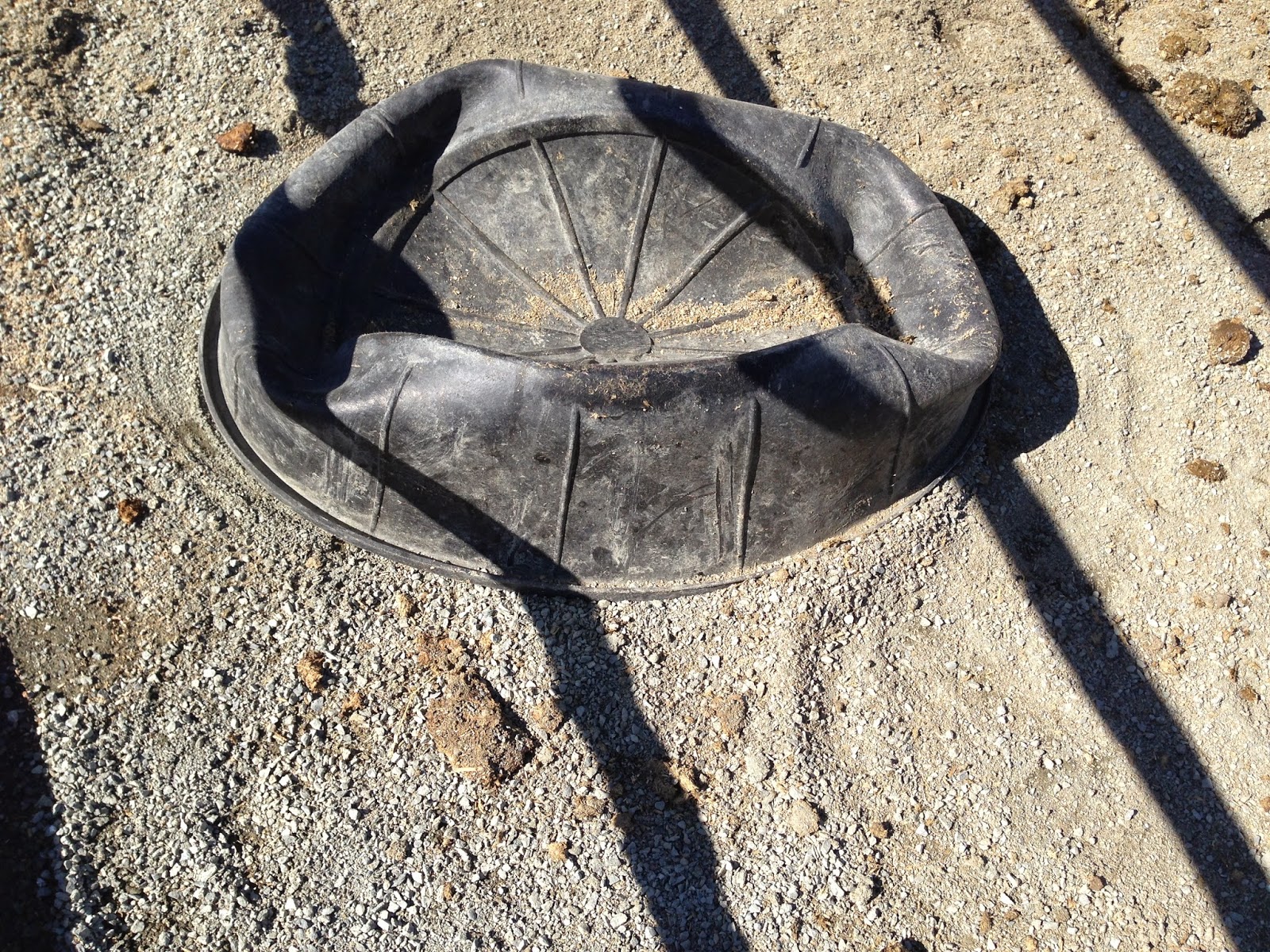 Water on my teeth makes me a happy mustang. 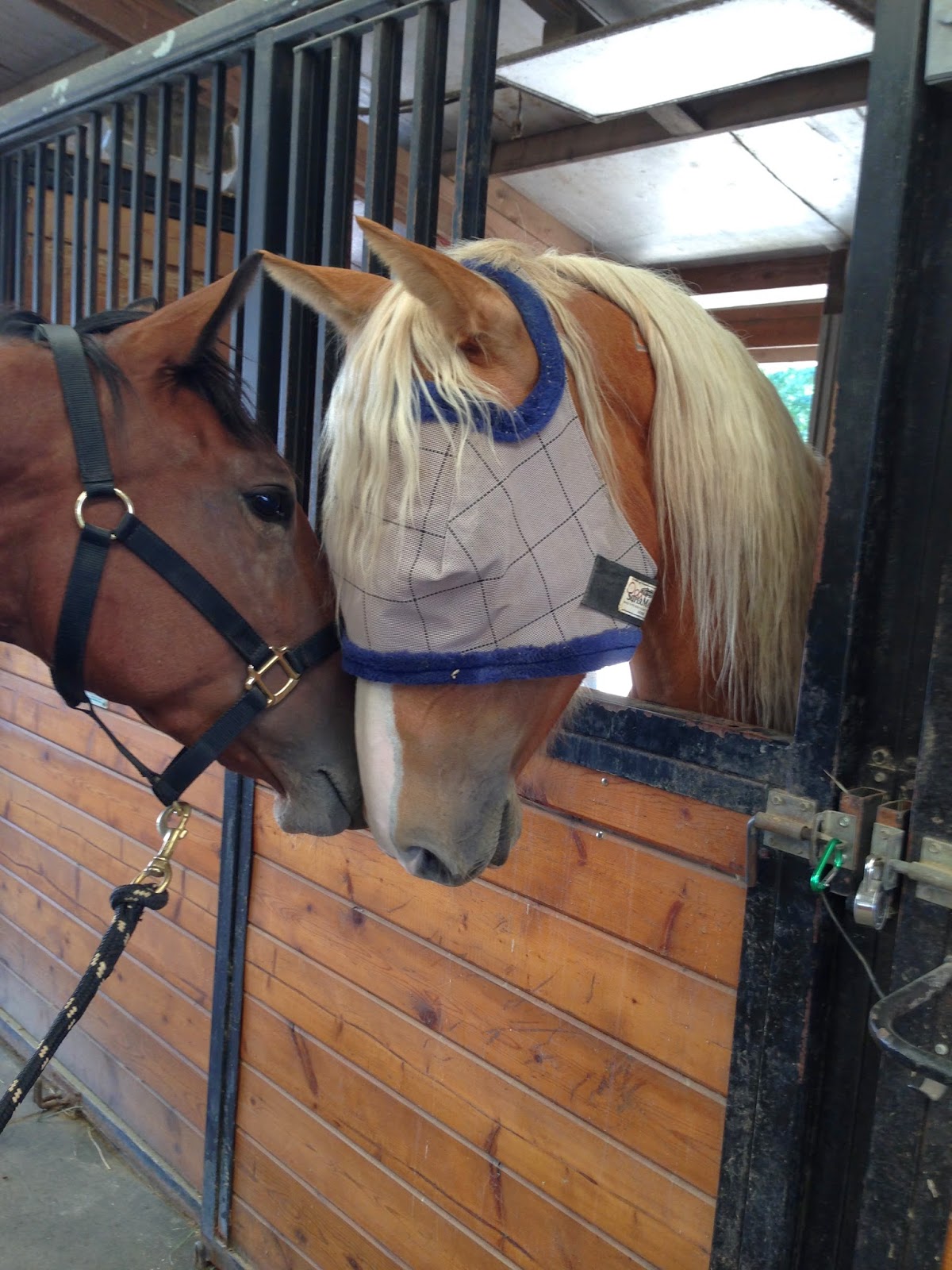 Why hello there, how are you?
It has been a busy week of training and working the girls.  Opal and Ehawee are looking and feeling great.  Ehawee was lounged over a small fence this week in the jump course.  Once she focused on her task, she sailed over easily.  Opal and Ehawee are still being a little food oriented at lunch time, but this will pass in time.  It's time to dust off my tack and get ready to ride again.
Opal was re-introduced to the tarp this week.  While she walked over it easily, having it touch her was a little different.  Once I convinced her it wouldn't eat her, she let me put it right over her back and walk her with it on her.  It was also a windy day, so that hindered and helped me at the same time. 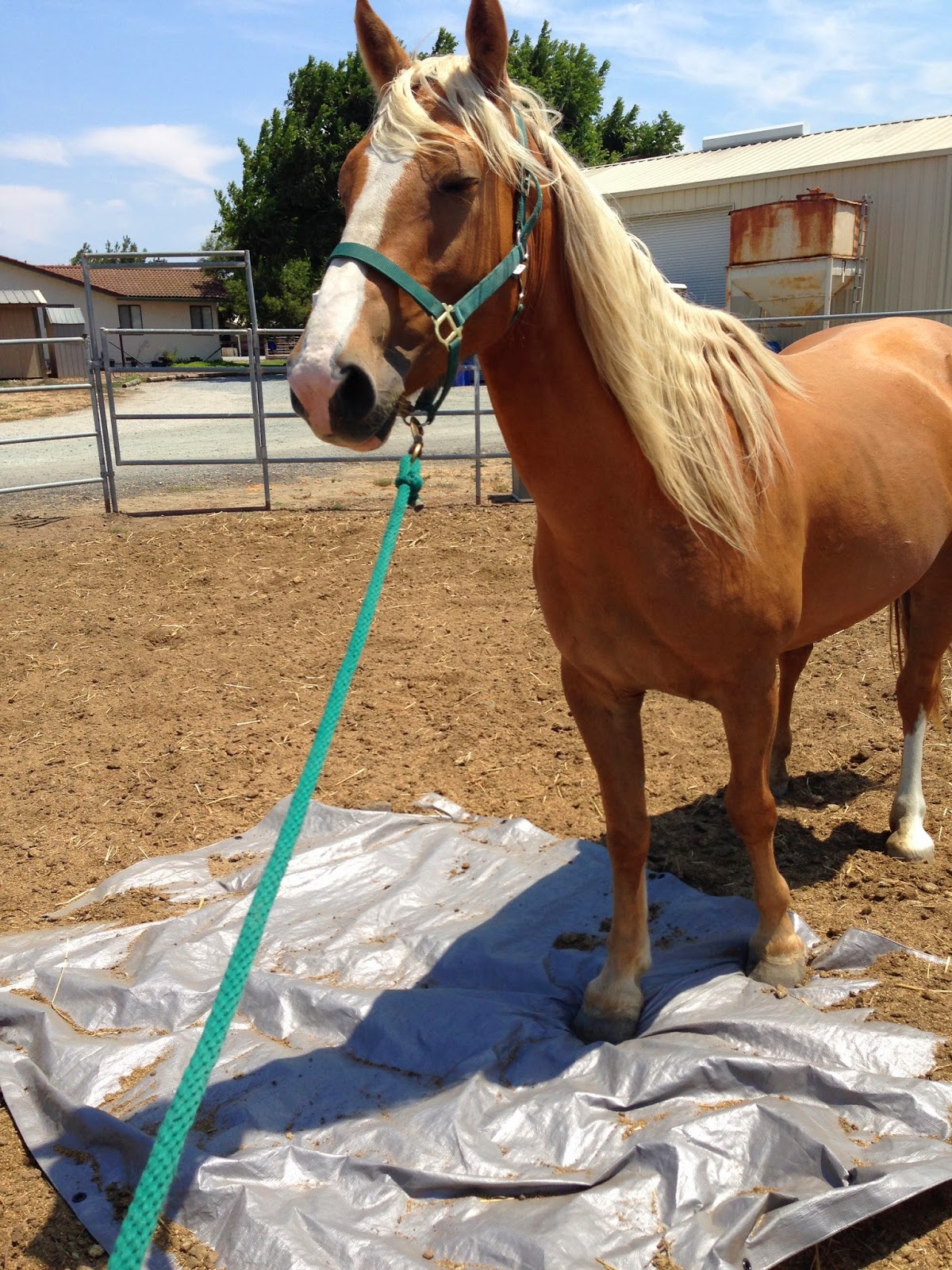 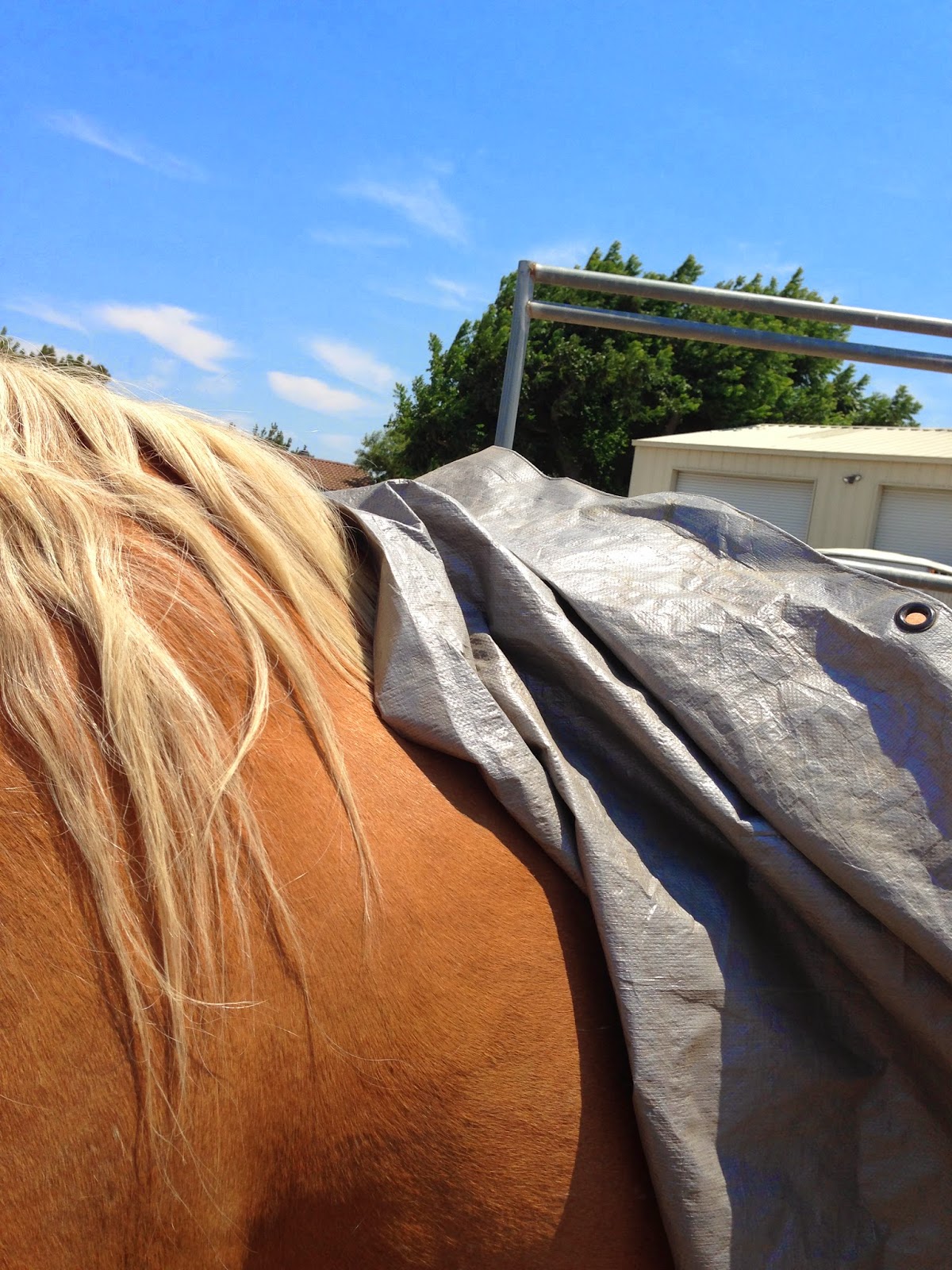 Tarps are not horse eating monsters.

Emerald
Emmy has had a full week of training.  Working with mounting blocks, ropes, and tarps.  Scary, horse eating tarps.  Emmy was very curious at first, she even picked it up with her teeth, then it crinkled, she backed up, it followed her, she snorted, finally dropping it and cantered away from it.  Eventually with a guiding line and letting her explore at her own pace, she went over the tarp. 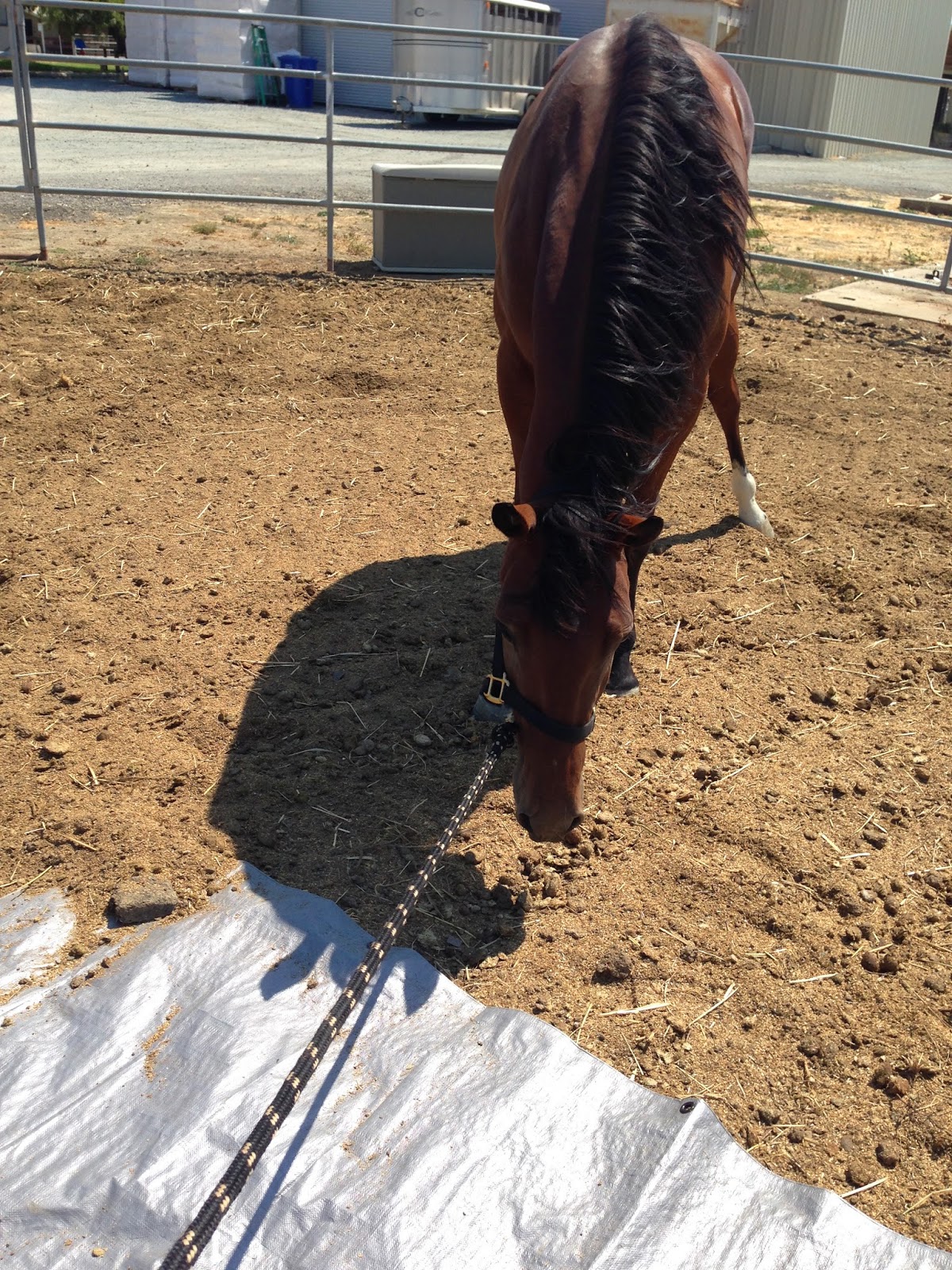 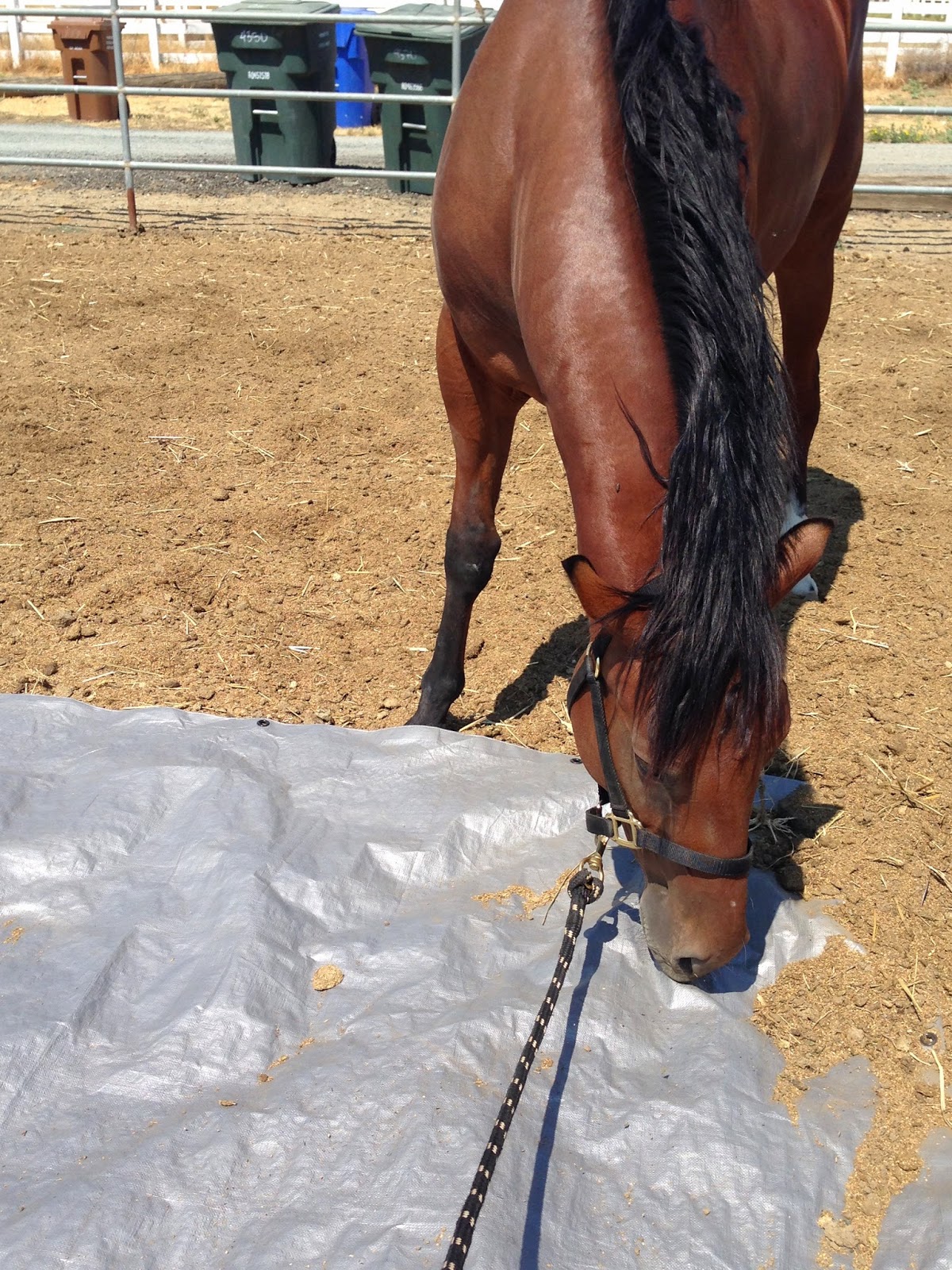 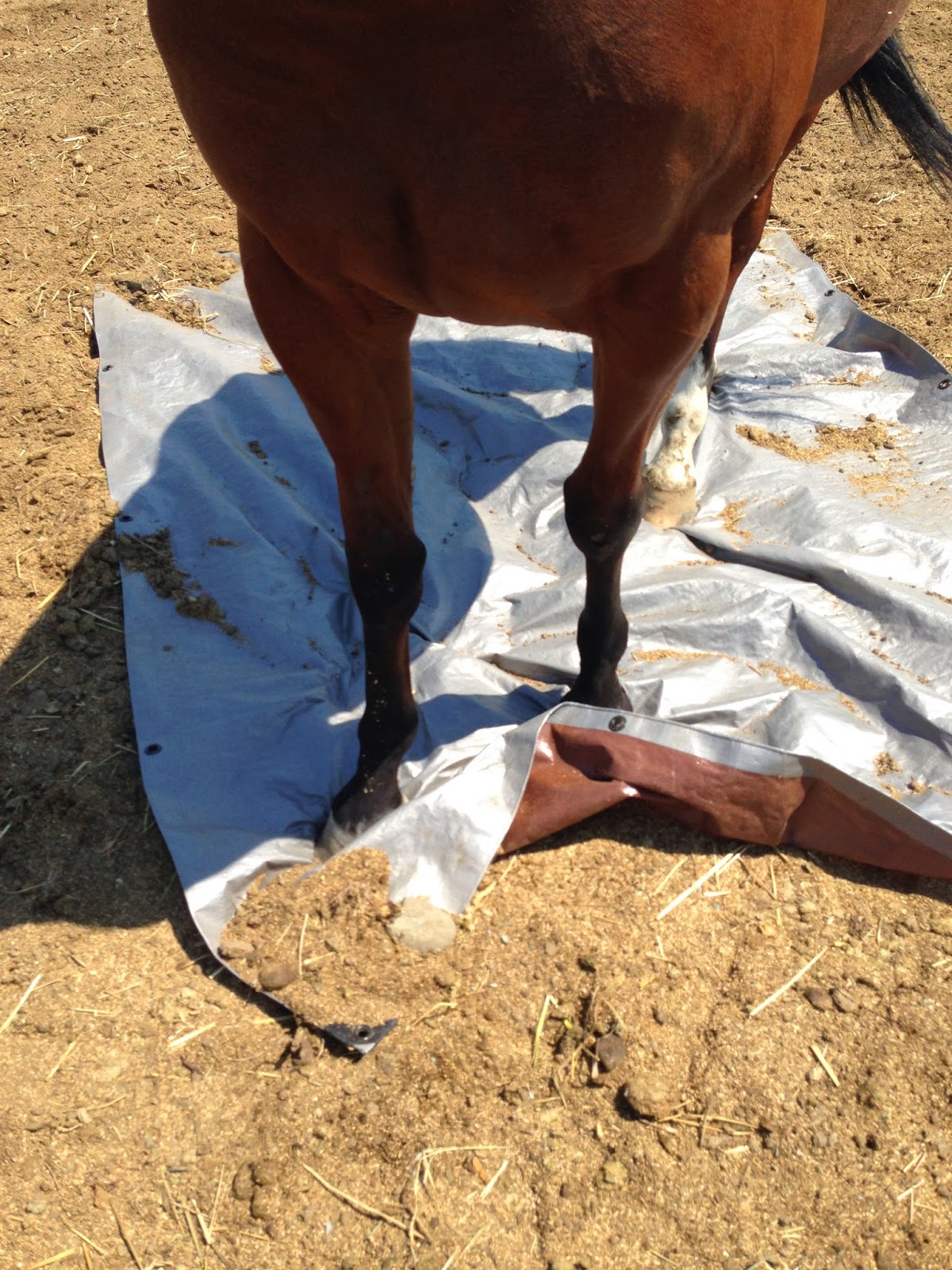 Emmy was also given a licking toy in her stall and a big water tub in her stall.  Unfortunately Emmy LOVES water....and after 3 days, her tub suffered a fatality.  Future note: rubber tubs for Emmy.  She is a very sweet, water loving, and playful mare. 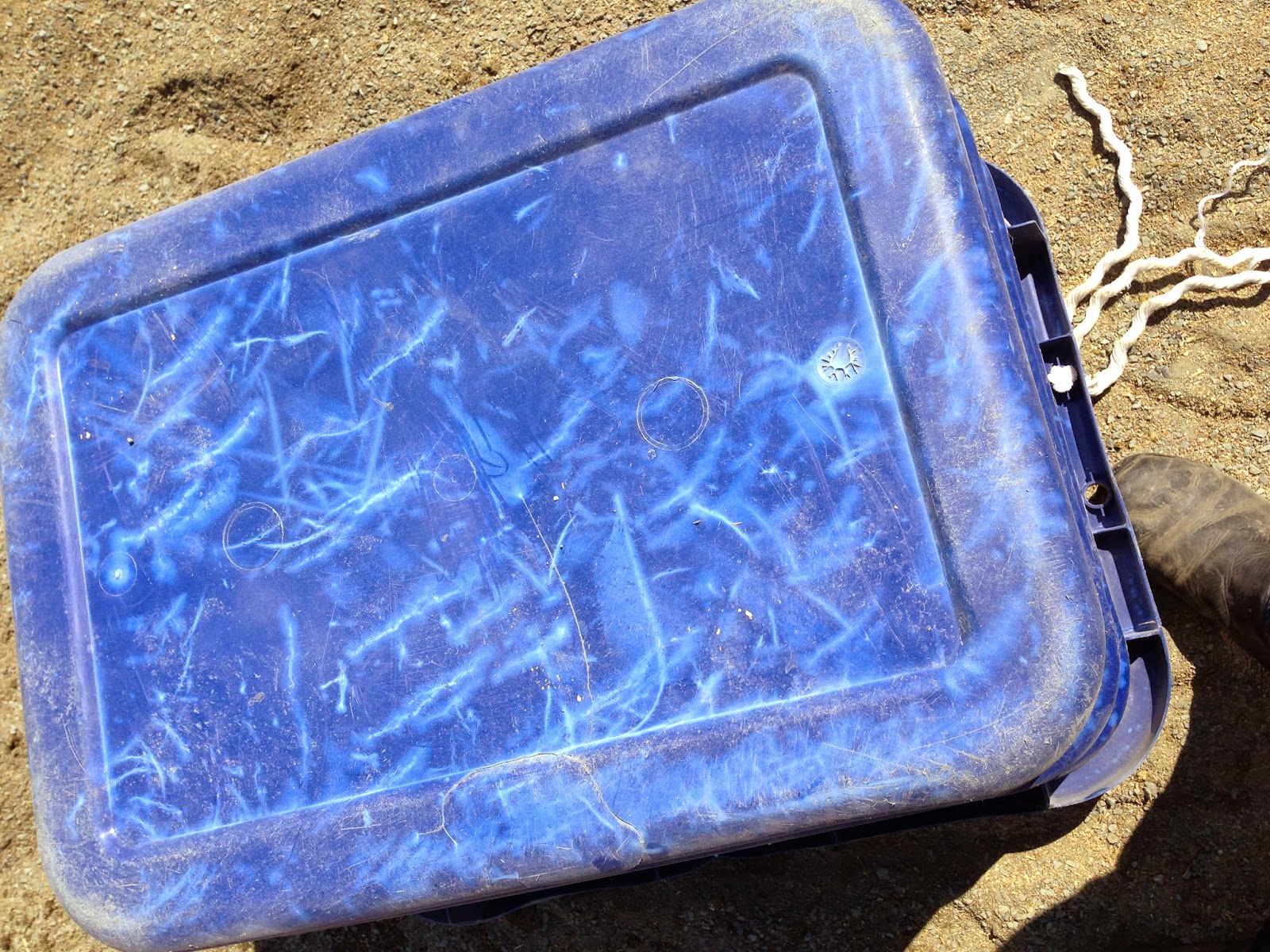 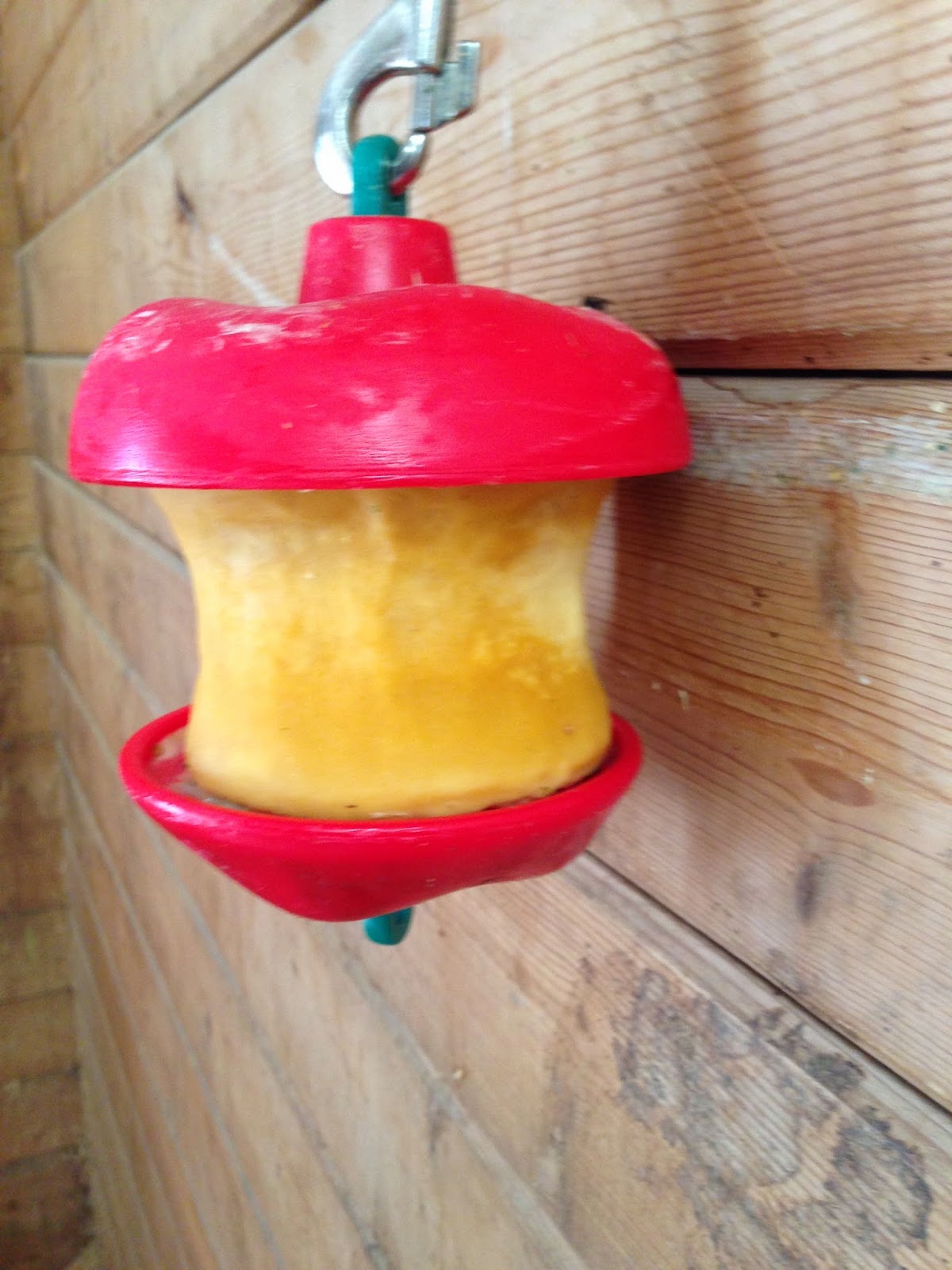 RIP water tub.  Carrot flavored lick after 2 days.
When working with the mounting blocks, I line her up to the block, lean over and give her lots of rubs and scratches on both sides of her belly while leaning on her a little more each time.  She really enjoys her belly rubs. 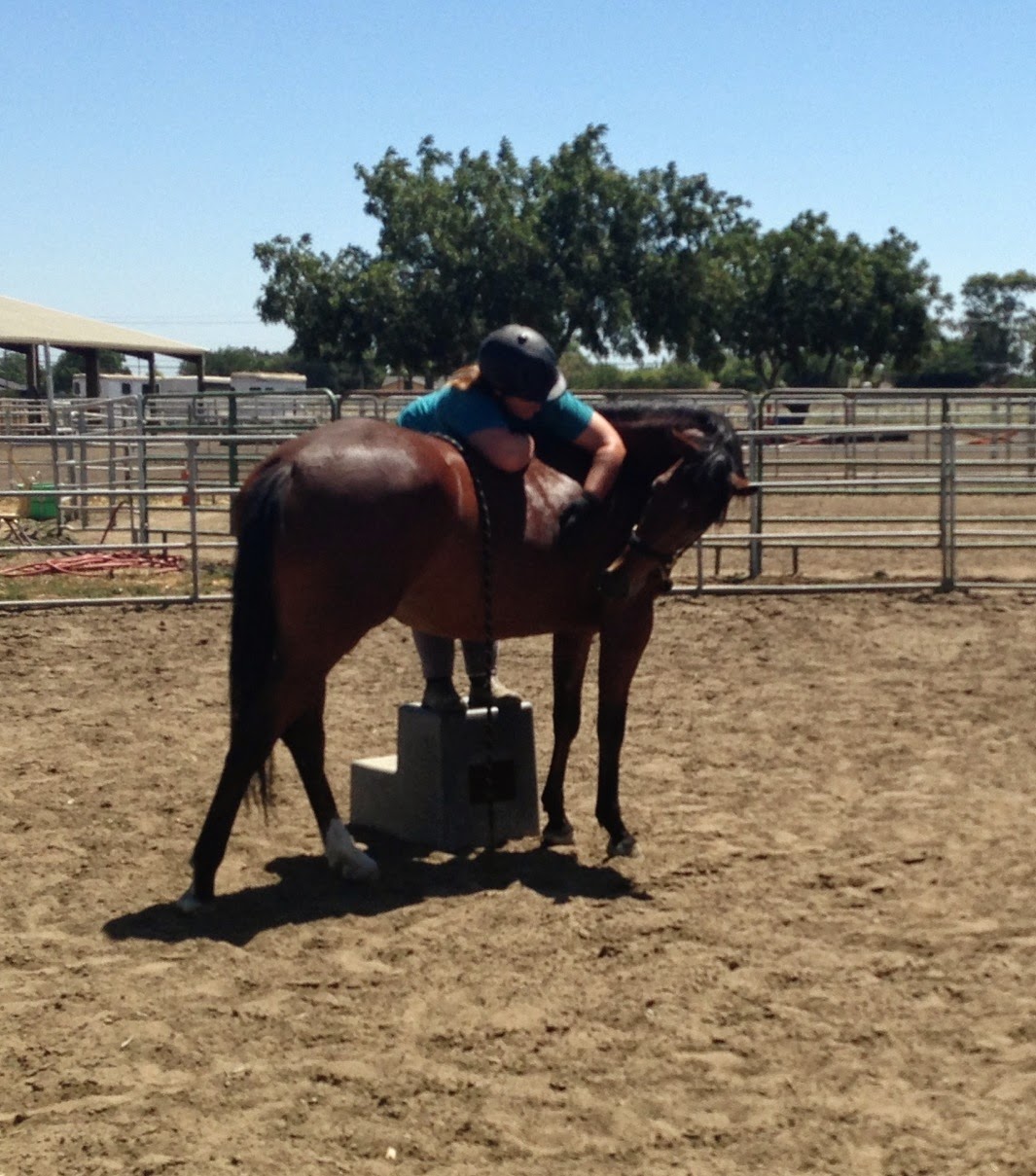 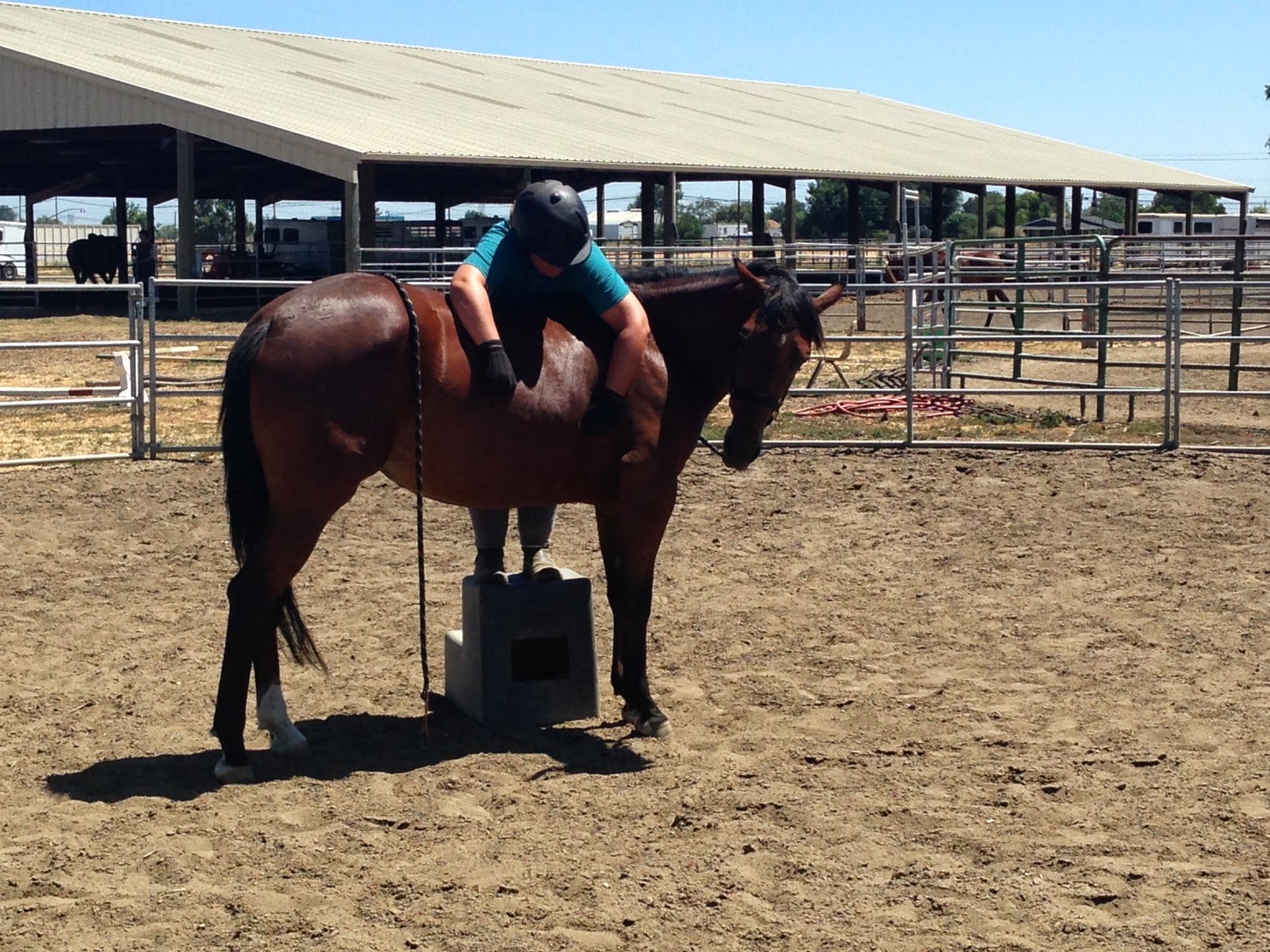 Posted by Carolynn at 9:03 PM No comments: