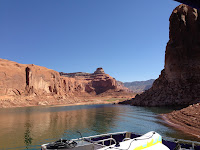 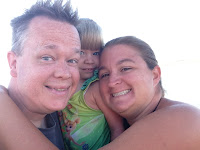 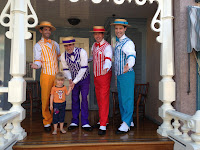 Tigger is my daughters favorite, but watching "Uncle" Jon dance is a close second. 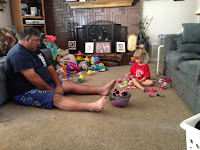 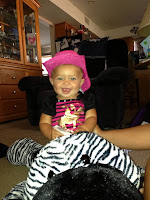 Princess Tea time with Papa's and a Zebra ride for my niece.

Hi there!  I'm so glad to finally be home.  I love vacations with my family, weddings, birthdays, Disneyland trips and all, but 22 days away from my mares is a long time.  I missed them.  Both mares greeted me at the fence.  Once they were turned out by our pasture mate Sarah (owner of Gypsy and Satin) they worked their way around the ranch grazing.  Ehawee stayed with me long enough to get a few carrots and some loves then decided the grass was greener and off she went.  On a good note with her, her hoof is looking amazing and we might be able to start working again with her, YAY! 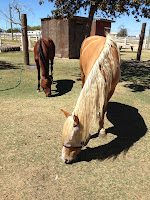 Opal was more interested in staying RIGHT WITH ME, or near me to keep an eye on where I was.  Even while working with her a bit today, she had to be right next to me.  She even was turning her hind to other horses who came near me as if saying "No, this is my Mom, and its my turn, go away." 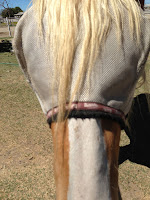 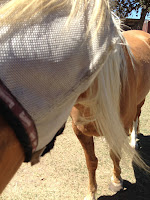 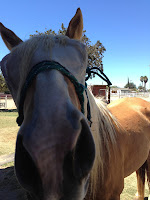 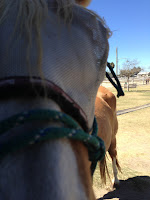 
She was much more willing to do things today.  Leading was a piece of cake back to her pasture, she walked through puddles with only stopping to give the water a sniff, she even let me hose her off!  *GASP*  We watched her friend Amigo (owned by Greg) getting hosed off before I started hosing her off.  She didn't care for her back being hosed off and didn't really stand well for that, but hey, its an improvement, so I'll take it. 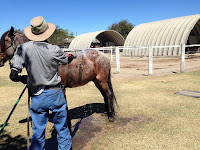 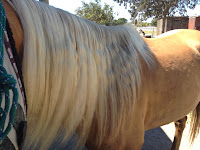 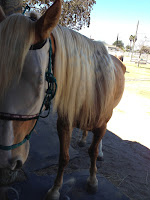 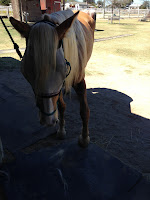 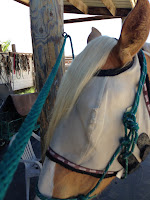 No more tangles!
Opal was not shy on loves today.  Lots of kisses, nuzzles and following me around at will.  Ehawee was just content grazing, she knows I always come home.  Best part about Opal letting me hose her off, she turned into a mud ball!  Not that you can really tell, the sand is the same color as her coat :) 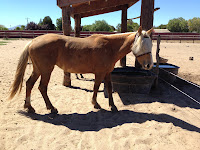 Posted by Carolynn at 4:58 PM No comments: 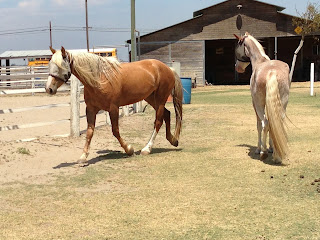 Enjoying some time out on the ranch.

I groomed Opal and got her into the surcingle.  I wanted to lounge her with side reins so she could get use to some pressure on the bit.  I walked into the round pen, or tried to.  Opal wasn't really wanting to work in there.  I ended up having to back her right up to it before turning her around to walk in.  Hey, there's more than one way to get things accomplished.  I hooked up the side reins on the longest setting.  I sent her out at a walk for a few laps, then asked her to trot out.  At first she mouthed with the bit a lot but a few moments later she had a nice slobber around her mouth going, meaning she was working with the bit not resisting it.  Her herd mates were out grazing, so Opal kept wanting to stop and visit at the gate, but with a little encouragement she kept going. 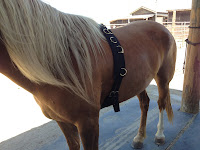 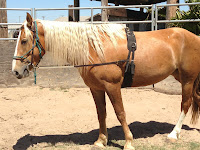 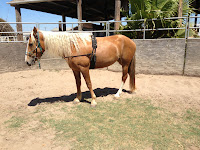 Working with side reins and standing at the tie pole.

Opal has been making some amazing progress, and since she's getting a break for a short while, I decided to play in the arena with her today.  We worked on carrot stretches, stretching her back and neck, and following me around the arena as I went over or through obstacles.  I will pick up with her progress shortly.  Until then, she gets a much deserved break. 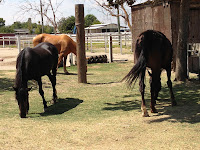 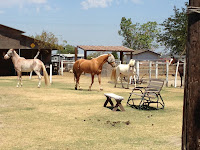 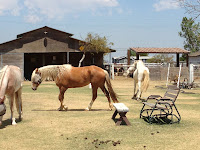 Posted by Carolynn at 8:59 PM No comments: 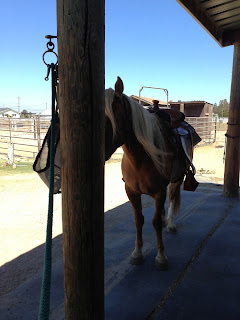 Standing at the tie pole.

Opal let me put the saddle on her without someone holding her lead line.  She's still getting use to the cinch, she backs up to look at the latigo each time I tighten it, which is slowly, but with her moving it takes me several minutes to saddle her fully. Minor detail. 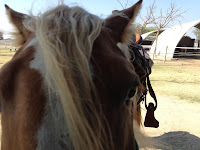 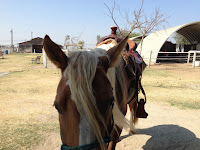 Opal saying hello to the camera.
I had one of my willing volunteers, Greg, lend a hand. He held Opal while I laid over her back with the saddle on. It's a bit difficult to take pictures while doing this though.   This time when she would want to step away from the block, I stayed leaning over the saddle and let go just a few steps later. I jiggled the straps, stroked and patted her all over, as well as put as much of my weight on her back.

We did this for both sides. While you typically mount from the left side of the horse, I try to school my horses for both sides. She did exceptionally well.  Only problem I had was its hard to take pictures while you are leaning over her back.

I have 3 more scheduled training days with her before I take a short break from the world and lose myself in my other paradise, we will see how she does those days but my current plan isn't to sit on her until I get back.   We have plenty of other things to work on like standing at a tie pole, work on lounging, introducing reins to the bit, and working on walking over the drip hose.  Hey, it's black, hisses and "spit" at her eye today out of the blue, I would be upset to :)
Day 25:

Opal stood better for her saddling, but still not 100% holding still.  Again, minor detail that will come in time.  She holds still when I put it on, its just when I cinch her up she turns her head and backs up to look at what I'm doing.  We practiced tacking up at the tie pole to help her learn to stand still.  Opal will stop when there is resistance, which is great, she also moves forward when you release the pressure, another plus.  We do this dance quite a bit. 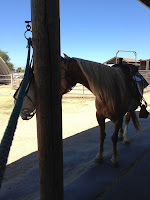 Once again I had an extra body willing to help.  Greg held Opal at the mounting block for me.  My goal was just practice putting my leg over her back with the saddle on.  It has been my experience when saddle training horses that they react to one of two main things.  1) They react to the weight on their back/something on their back or 2) They react to something crossing over their back.  I took my time easing my leg across her back and slowly moving more and more of myself onto the saddle.  On occasion she would lean away from the mounting block, but I was able to stay with her.
One such occasion I was about 3/4 of the way on her when she stepped away.  My leg got hooked on the back of the saddle as she stepped forward and away from the block.  Greg had his hands full trying to get Opal to halt and trying to support my shoulders to help me out of this jam.  Opal eventually halted, and I finally got the leverage to get my leg over the saddle and I hit the dirt.  Opal turned to look at me, puzzled as to why I was on the ground.  It was an easy slow 'fall' if you can even call it that.  I wanted to give her another shot, make sure she wasn't insecure about me hitting the ground.  She stood wonderfully, no tension, no hesitation. 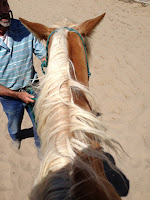 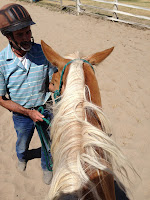 Hard to take pictures when you're in the saddle.

I decided to go for it and slipped quietly into the saddle.  She stood.  Greg praised her and gave her some carrots and I stroked her neck.  Greg moved the mounting block back over and I slipped off her quietly.  I tried it again and once again she was calm.  She would take a step or two forward as she was looking for more carrots form Greg.  I asked Greg to walk her forward a few steps, she never hesitated.  I dismounted her with no mounting block this time and she was cool as a cucumber.
Greg walking Opal while I ride her.

After her wonderful session I turned her out to graze.  A hour went by and it was time to go home.  I took a flake of hay and she started to follow me, until the other horses in the pastures next to her started acting up because they wanted her hay.  I got to her gate to let her in and she started backing up.  I grabbed her fly mask to finish leading her into the pasture, which I have done several time before.

Math time:  What do you get with 2 mares and 1 gelding try to ambush 1 mare going into her home?  Answer:  an owner/rider/trainer with a bruised arm.  Opal went to bite at the gelding, but the way I was holding her and leading her put my arm right into the path of her mouth.  Opal and I had to come to an understanding....biting people is never ok....even its its directed at another horse, you don't bite when people are near, period. 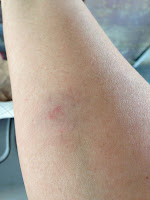 Eh, I've had much worse.

Well, if I got ambushed at my door, I wouldn't want to go home either.  I ended up having to halter her and backing her up across the ranch and into her pasture.   Silver lining:  she backed up calmly and with little resistance.  In the end we still ended the day on a good note.