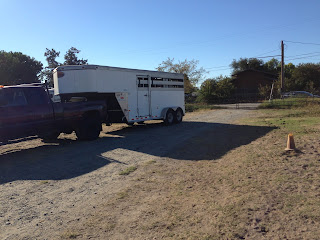 Recent fires got me thinking, would Opal load?

Once again, Opal and I were riding in the arena with another rider and horse (Greg and Amigo).  I've been digging around in my plethora of tubs of tack looking for bits.   I find it hard to put into words other than Opal just doesn't feel 'right' in the two bits I've tried so far.  I expect some resistance as she is learning, and its not even that...its like tough silly puddy...and not that shes pulling against my hands, she's not even close to leaning on them.  It's just kind of blech.  I found a hackamore in my stash and wanted to give that a try.  She responds very well to the halter....maybe this would be it for her.  I got it all fitted to her at the tie pole and then it was time to ride.

Opal was a champ in that she really tried....but she hated the hackamore.  I ended up spending most of the time using the lead line to the halter to help steer her or halt her.  At the end of our ride, Greg and Amigo were also finishing up.  Opal wanted to say hi to her friend Amigo.....and sweet talk Greg out of some treats.  Opal likes being right next to me, but we are working on minding our space...but she will still reach her head out for loves. 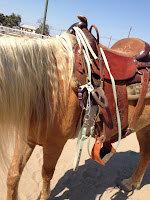 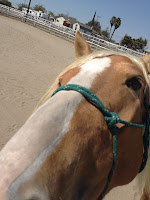 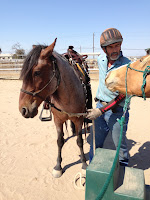 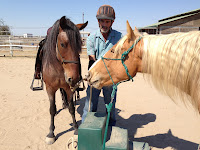 I know you have carrots.

A beautiful day today.  Recently we had a big fire near the ranch, 20 miles away give or take.  We didn't have to evacuate, but we were ready to receive animals if needed.  Fire is now no longer a threat, but it got me thinking.  Opal hasn't been back in the horse trailer since she came home mid-June.  Would she willingly go in?

If you don't recall, at the BLM facility she came from, they put her in a chute and we backed the trailer up to it, then she was 'encouraged' into the trailer.  The process works for all involved with the un-gentled horses, but horse trailers look like something scary.  Caves.....and what exactly lives in caves?  Predators.  Lots of horses aren't exactly on board with loading into big scary caves.  Opal trailered well form BLM, but would she go back in? 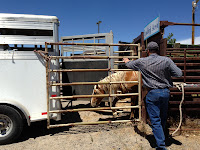 Opal entering the trailer at Litchfield BLM facility in June this year.

Not having my own rig to work with, I had to wait and coordinate a day when the rig would be hooked up and not in use.  Today was my lucky day.   Armed with my clicker, a pocket full of carrots and alfalfa in the trailer, I was determined to get her in.  Except Opal surprised me.  No sooner had I opened the trailer door, she was ready to walk right in!  I gave her a pat, stepped on up, and she followed suit.  Lots of praise and loves.  We walked out, and back in....and out and back in.  Each time she spent longer and longer standing in the trailer.  I would close the divider on her, step outside the trailer, walk back in, mess with the lead line, and so on.  Never once did she resist or become tense.  In fact, after I was done, she spent the rest of the day trying to pull me back to the trailer! 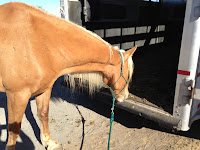 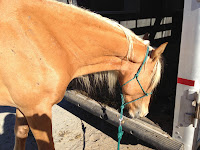 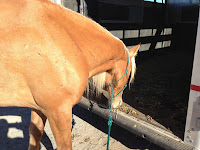 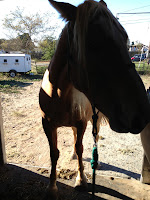 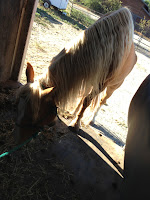 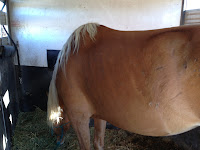 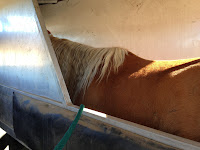 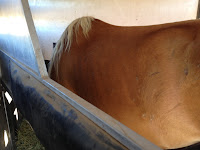 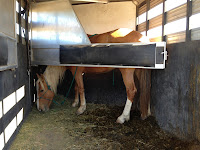 Next we got tacked up and I put another bit on for her, one that was rubber.  I started ground driving her to help direct her around the arena.  We had a few bobbles, but all in all she did really good.  After her 10-15 minutes of ground driving, it was time to ride.  Sarah was on her horse Gypsy (Opal's pasture mate and resident alpha mare of their 'herd'.  We played follow the leader.  Gypsy and Sarah lead, Opal followed.  I relied on my legs to get her going and to guide her, but when that wasn't working, I turned to the reins.  She was much more responsive, even in her halts!  (Someday we won't need reins to halt, but that's a ways off right now)  We rode at a walk for about 20 minutes, then stood in the arena at a halt watching Gypsy and Sarah work.  She stood very well and only wanted to walk off over to the rail because someone else walked up to it and Opal wanted a carrot.  (Yes, I know, she's driven by food, but she only gets so many baby carrots a session, the rest is the clicker.  It works for her right now)  Opal was also brave enough to drink from buckets with her bit in today, another first!  (yay, I won't have to un-tack her on trails to get her to drink.  I've known 'those' horses)  Opal is also getting use to carrying all the gear back on her saddle at the end of our ride.  I don't always have my horses carry things back.  If they have been good, a lot of time I'll un-tack them in the ring and let them go right there.  Opal is still getting use to it all, so for now, she carries stuff. 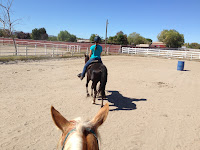 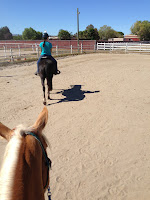 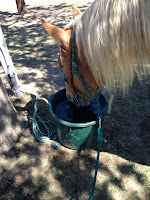 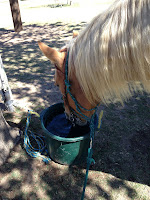 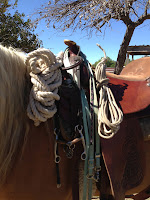 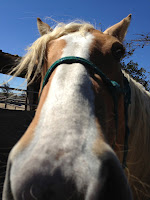 Today's ride.  Opal also likes nudging the phone as I take a picture.
With Opal's session finished, I turned her loose to graze and went to help others working on the trailer with their horses.  Opal was right there checking thing out, but minding her own business and keeping her distance.  One of the horses, Whiskey, was finished practicing and his owner Yvette turned him loose to graze.  Now Whiskey is normally mellow, energy saving kind of guy, but he does like to show off for the mares.  Well, he decided to kick up his heels and take off at a gallop right past Opal.  She looked up at him, then back at me with a look that said "What on earth was THAT all about Mom?"  Then she went on her merry way grazing.