A trailering we will go

A trailering we will go 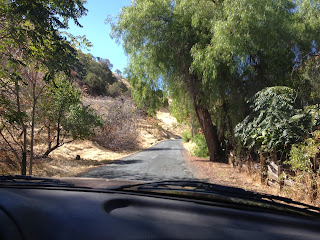 No pictures to share for this day as it as just me out riding early in the morning.  Opal and I rode in the riding arena where we worked on walking, circles, moving off my leg to stay on the rail, and jogging.  I had her jog three laps each direction.  She did well for her second attempt, only stopping when her herd mates were near the arena while they were turned out.  She is very willing to try whatever it is I am asking of her and when she doesn't understand, she stops.  Sometimes I get off her and show her on the ground, sometimes I break the exercise down into smaller pieces to help bring her along.  In the end we get there.

We were off for a trailer ride and hike to Black Diamond Mines with Mustang Sancho, his adopter Marialaina, my daughter, myself, and Opal.  Opal loaded into the trailer with ease and unloaded just as easily. 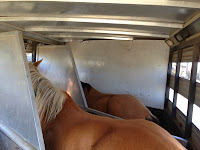 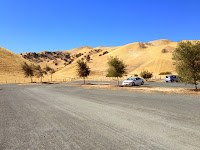 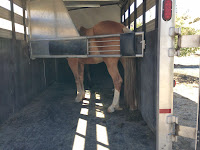 Loaded in the trailer heading to our destination.


Our biggest hurdle for the day would be Opal not eating every blade of grass, leaf, or bush she came across.  Its fall, winter is coming, and its common with mustangs that they go into 'bulking up' mode to pack on weight before food becomes scarce in the winter.   Opal gets fed plenty of food, but sometimes instincts are hard to reason and argue with. 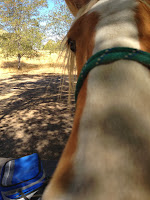 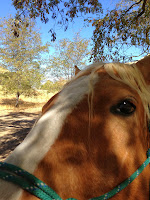 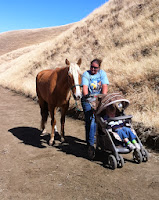 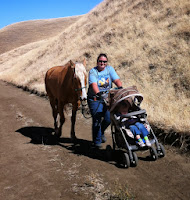 Opal, my daughter, and myself on the hike.
Photos by Marialaina. 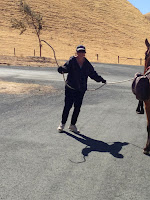 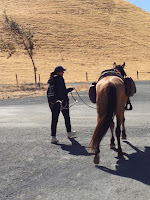 The five of us hiked to the top of the first hill to the picnic area to have lunch.  Opal was more interested in what was on the table and what we were eating than standing still.  After lunch we found a narrow bridge that we decided to take advantage of.  Opal and Sancho took turns walking across the bridge while Laina and I took turns taking pictures. 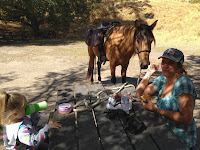 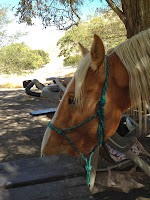 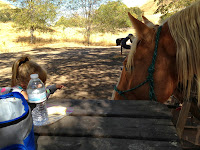 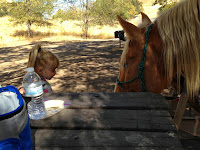 
After the bridge we met a few hikers and introduced them to the horses.  I also practiced picking up Opal's front feet.  Good thing too, she had a few small pebbles in her hoof.  Having only my keys on me and not a hoof pick, I used they keys to get the rocks out.  She did well with this, but kept wanting to turn towards the path to be social. 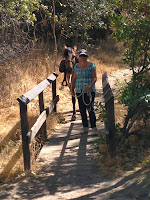 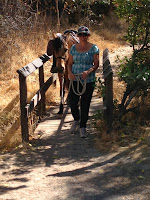 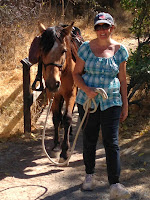 Marialaina and Sancho cross the bridge. 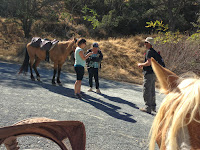 Meeting hikers on the trail.

On our way back to the trailer my daughter fell asleep in the stroller.  Opal walked right along with me and the stroller.  Any time we stopped, she wanted to look in the stroller and nudge my daughter.  I'm really glad she likes kids.  Once home, Opal stepped right out of the trailer with no issues.  Her herd mates were happy to see we had returned, then quickly went back to bossing her around.  Opal might be the biggest one out there weight wise, but she is definitely not calling the shots, and she's ok with that, as am I. 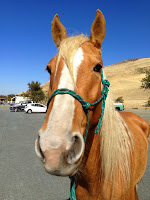 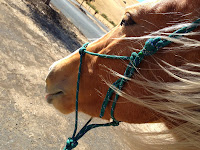 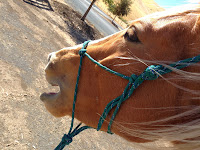 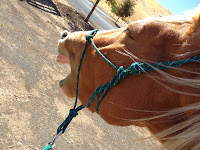 Opal was a little sleepy after the hike.
Posted by Carolynn at 9:35 PM