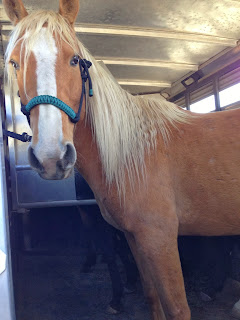 Opal in the trailer, ready to go to the play day.
Opal's snazzy new halter came from 'aunt' Amanda,
my best friend of many years.

I have a lot of video here, so they will be at the end of this section of the post.  We were invited to go over to Cypress Stables for their fun class play day.  It's a whole whopping 2.1 miles from our ranch and owned by a friend of several of us at Kickin Back Ranch (KBR for short).  Opal was loaded last in the trailer, mostly to make sure she would load into any part of the trailer. 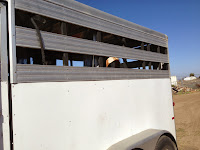 All set to go.

With Mustang Sancho, Gypsy Rose, and Opal all loaded (as well as Whiskey and Tesoro in their trailer) we were off to Cypress Stables for the afternoon.  Opal unloaded well and we walked over to the back of my car to get tacked up.  She stood well for me without needing to be tied.  I decided to put a red ribbon in her tail as a warning to other riders that she may kick.  A red ribbon in the tail is a universal sign that the horse may kick, but not always (Christmas shows, 4th of July parades tend to have them in tails just for decoration rather than a warning).  While Opal has not kicked out under saddle with me, she has kicked at one mare who crowded her while turned out.  In Opal's defense, this other mare started kicking Opal first, but still, having other horses in the arena, better safe than sorry.

Getting ready to ride.

First surprise of the day, we were riding in a covered arena.  Great for staying dry on rainy days, staying cool on summer days, but some horses don't like the echos and harsh shadows they create.  Opal didn't mind it.

In the covered arena.


We did every game played plus worked the outside trail course a bit.  We did the marshmallow on spoon class; Red light, Green light (Opal did this once, she was getting frustrated with walking 3 steps and having to halt so quickly); single barrel relay; single barrel pumpkin relay; pole bending; and clover leaf.  Each event Opal wasn't sure what I was wanting her to do.  She catches on fast, but with patterns changing every game, she'd get going one way when we needed to go the other.  Each round she got better and better though.  Prime example her clover leaf round 1 was 1 minute 40 seconds and her round 2 was closer to 54 seconds.  I had not planned on trotting her as much as we did, but she decided to go for it and I let her.

After the classes were over, we went outside to work on 2 obstacles we didn't have set up at home, a rope gate and a mail box.  No scary monsters there, Opal had no problem with either of them.

Working on the obstacle course.


Where we did find a challenge was at the end of the day.  It was about 6:30 p.m. when we were ready to load and go home, but Opal was hungry (she'll tell you she was STARRRVING) and it was dark out.  Being in the back of the trailer, she has more room to stand, but a shorter entrance into the trailer.  I think between those three things, she decided she wasn't going in the trailer.  I tried treats, we tried a rope, finally we hung up a small amount of alfalfa hay in a hay bag....she jumped right in.  (Note to self, take alfalfa in trailer to Nevada)  Once home, Gypsy and Opal shared an arch barn stall and paddock for the night since the pasture had already been fed dinner.  She was one hungry girl.

Gypsy, Sancho, Tesoro, and Whiskey were all wonderful as well.  Sarah and Gypsy did lots of trot work in the classes, which was not the original plan, but Gypsy said "Let's go Mom" and they were off.  Marialaina and Sancho did half of the classes in hand and rode a few as well.  Angie and Tesoro were solid in their walk, trot and gait during their ride.  Tesoro wanted to keep moving, so standing still between races was hard and he was getting frustrated.  Angie got off of him and called it a day before he got too frustrated.  Whiskey was ridden by Angie's brother Fernando and led via lead line by their father Mario.  Whiskey was calm and just went with the flow of things.

The horses and riders at Cypress Stables also did well and were a pleasure to ride and compete with.  It was a nice mix of riding abilities and levels with both barns.  Thank you for a wonderful first show out for Opal and a wonderful experience for all out horses and riders.  I know I can't wait for the next one.

I also have to thank Yvette, Tracy, Sarah, and my husband Matt for the videos and pictures.  They have all been jumbled up now and I'm not exactly sure who took what picture now.

Opal's Clover leaf round 1 and round 2

After a great day at the show yesterday, things were slow to get going this morning.  Gypsy and Opal were slowly eating their breakfast in the paddock they were sharing, while Satin and Ehawee had finished hours ago.  I decided to lounge Ehawee for 10 minutes to see her move out and start her back on the road  to riding.  (She's been recovering from a hoof injury that occurred in late January this year, good news is her hoof is almost fully grown out and has been cleared to lounge a few days a week)  I was happy with how she did, she wasn't sore or lame.  She needs work to build her muscles back up, but that's what happens when you have to not work for nearly a year.

Remember the wonderful crew from Cypress Stables?  They came to play on our turff today!  Several of us went out to the horse course and spent the afternoon riding and working on different obstacles.  Opal was shown the drag (a small log on a rope) with me on the ground pulling it while leading her.  She wasn't sure about it at first, but was at least walking with me and relaxing with each step.  Gypsy got to pull the drag while being ridden.  Gypsy and Sancho go with their adopters in a few weeks for a Trail Trail competition.  It was the perfect weekend of horsing around for us all. 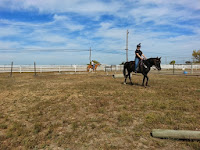 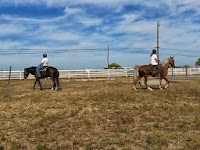 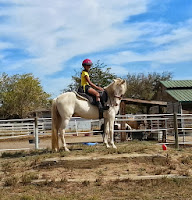 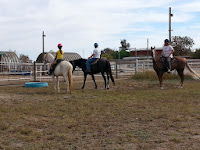 KBR and Cypress Stable riders all ride the horse course at KBR.