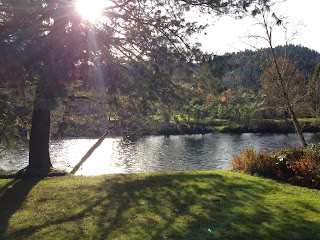 My view for the week of Thanksgiving.


I spent the holiday week at my Grandparents in Oregon.  The live right on the river!  I had a very peaceful Thanksgiving and I hope you all did as well.

Since I was out of state for a week, my girls got turned out this week earlier this week to get their 'wiggles' out, and boy did they have them.  On top of running a few laps around the ranch, Opal stood up for herself.  She was quietly grazing on some scraps of hay when a gelding came up wanting her food.  Opal put her ears back, the gelding put his back, she stomped her foot, he stomped his, she bared her teeth, he did the same, then decided the hay wasn't worth the fight.  A few months ago she would have walked away, and she still does when it comes to the alpha mare in her herd.

Today was trim day!  Opal's second trim since having her.  We trimmed her outside the round pen this time.  She did pretty well, except on one of her hind feet, she kicked out.  Not OK!  I quickly backed her up and moved her hind end and spent a few minutes keeping her out of my space.  She normally likes to be right next to me so having to stay away from me makes a big point to her.  Once she was standing quietly I invited back into my space, and had her go to the farrier.  She stood well the rest of the time.  Since it was her second trim job, I'm pleased.

Ehawee's hoof is doing well.  The farrier filed it down, but she wasn't ready for a trim yet. Her feet grow pretty slow and steady so she gets trimmed about every 3-4 months, double the regular shoe/trim schedule.  She's got amazing feet. However, with as little that's left, he felt confident she could work more.  Which is a good thing.  This has been a 11 month road.

Both mares are very fluffy entering California winter.  We've had lows of 28 the last few nights....brrrrr.  I'm not built for cold, but at least they are. 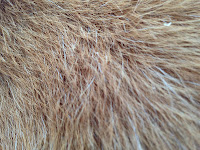 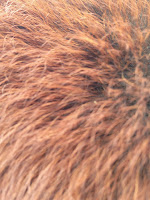 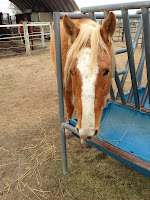 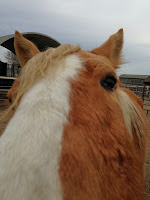 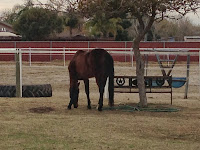