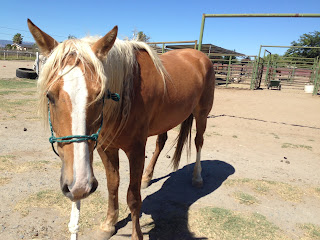 Out for a walk.

Picking up where we left off the day before, I brought her halter right into the green pen with me.  She walked right up to me, lowered her head and let me put the halter on right over her nose, it was like we had done this a million times.  I brought my nubby gloves (they have little black puff paint type pebbles on them) and let her explore them.  It didn't take her long to start letting me rub her face with them, she thoroughly enjoyed it.  She also enjoyed having her neck, mane, back, withers and belly rubbed. 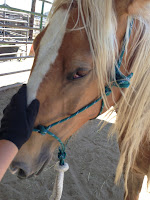 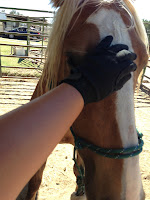 Enjoying a good rub down.

After that we practiced walking on the lead line.  I gave Opal lots of encouragement with each step she took forward.  Lap after lap in the round pen and Opal was proving not only would she walk with me, but would stop and back up with just the slightest bit of pressure on the halter. 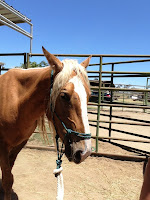 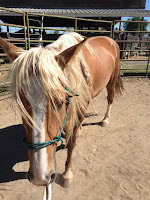 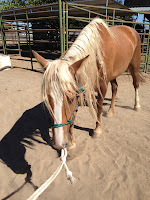 One step at a time.


Now to give her a test.  Opening the gate and walking outside her pen.  She gave one snort when I asked her to follow me, but a carrot convinced her it was worth coming along.  We spent about 5 minutes outside the pen taking one step at a time. 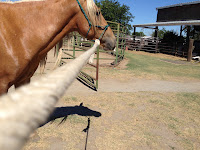 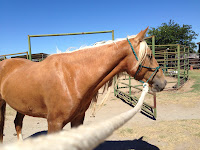 What's all this out here?

Once back in her pen I let her see a fly mask.  With no hesitation she let me slip it over her halter.  Once I felt she was comfortable with it, I slipped off her halter, gave her lots of love and let her enjoy the shade. 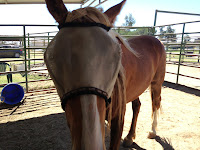 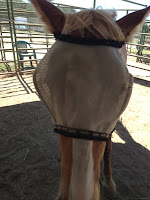 Boy is it going to be hot today!  Days like this I head out to the barn early.  Opal had a big test today.  Walking to the arena!  I took her heard mate Ehawee out to the arena first.  The two may be in separate pens now, but eventually they will be in a pasture together.  They have to get to know each other and their place in the heard at some point :)

Opal's turn.  Her walk out to the arena went fairly smoothly.  She stopped and wanted to visit with the donkeys, but a few encouraging 'walk' commands later we were moving again.  She also stopped at the arena gate.  Its much narrower than the green pen gate and I don't think she was sure she could or should get though it.  A carrot and the clicker quickly changed her mind.  Once the gate was closed, I removed her halter.  I needed to make sure she would let me get it back on her easily once it was time to go home.  Ehawee came over to say hello as I walked out of the arena.  At first Opal just walked around checking things out, but then Whiskey, another horse at the ranch, wanted to play with the girls.  HE was turned out grazing on the grass while my girls were in the arena....they began to run and chase each other.  I managed to get a few videos of the 3 of them playing....I hope they post. 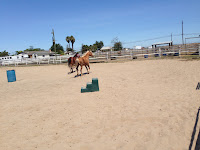 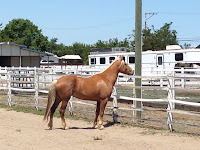 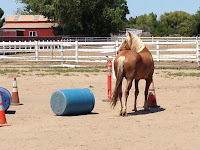 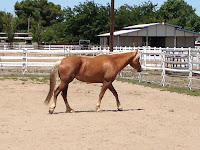 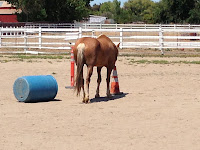 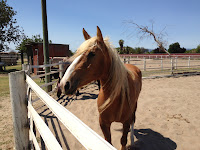 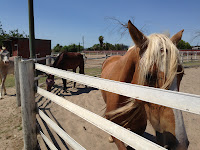 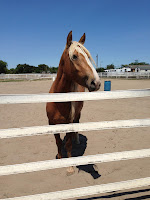 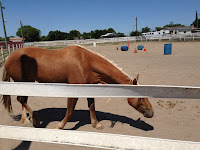 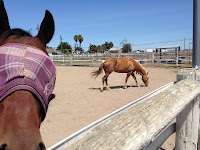 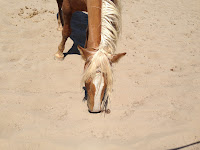 Opal stops to sniff a piece of sheep wool
that blew into the arena.

With the temperature quickly reaching 100, it was time to seek shade and shelter.  The two girls had enjoyed a 20 minute romp in the arena, Opal even found and played in the water bucket.  Opal was itching herself on a barrel in the ring when I approached her.  I put my gloves on, haltered her, then gave her chest a good rub down.  I think she rather enjoyed it....she was almost falling over she was leaning over on me so much.  We took a different path back to her green pen to expose her to more of the ranch.  She walked along as if she was a seasoned show horse.  We got to the gate of her green pen and she put on the brakes.  She wasn't done visiting the other horses and wanted to stay out longer.  She kept backing up, so I simply turned her around and started to back her into the pen.  We gt most of the way there when she decided that she would walk the rest of the way.  Its going to be a hot hot week up here, so I'm looking forward to playing around with water with her :)